Fragile X-associated disorders are passed down in families through a mutation in the FMR1 gene. The FMR1 gene is located on the X chromosome.

Even for genetics professionals, FMR1 inheritance is complex and confusing, so it’s no surprise that families often have questions about the genetics of Fragile X.

The Genetics of Fragile X Webinar

Brenda Finucane, a licensed genetic counselor and professor at Geisinger’s Autism & Developmental Medicine Institute, held an NFXF webinar to help each of us better understand the genetics of Fragile X. In this video, our own Jayne Dixon Weber hosts as Brenda answers your most frequently asked questions related to Fragile X and the complex inheritance pattern of the FMR1 gene.

Following the original live webinar, we heard from the community who told us how great this presentation was, and many told us it’s the best description of Fragile X that they’ve ever seen.

Click to play the video below, and you’ll be asked to provide your contact information to receive a link to watch the webinar. 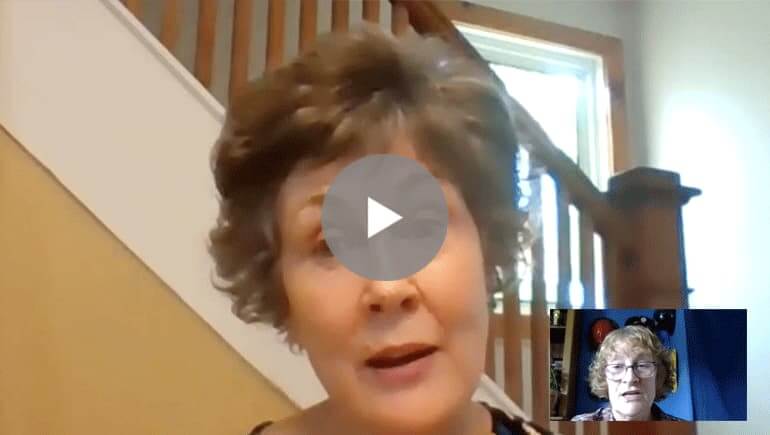 A Quick Look at Chromosomes and Genes

We’ll start here with some background on chromosomes and genes. Or you can jump ahead to learn more about the FMR1 gene specifically.

Our bodies are made up of about 60 trillion cells. There are more than 200 different types of cells, each of which manufactures proteins. The kinds of proteins any given cell makes determine its particular characteristics, which in turn create the characteristics of the entire body. Bones, muscles, blood, and hair, for example, are all made up of proteins.

The instructions for making these proteins are stored in molecules called DNA. Chromosomes, which are found in the center, or nucleus, of all of our cells, including egg and sperm cells, serve as the structure that holds the DNA.

The job of a gene is to either make a protein — the building blocks of all the structures in the body — or to regulate other proteins in the body. Our bodies contains an estimated 25,000 to 35,000 genes.

DNA is the material that makes up the chromosomes and genes located in a cell’s nucleus. Genes are sections of DNA that carry the information that determines the traits passed from parents to their children, and are located on the (typically) 46 chromosomes in each cell.

DNA needs to be in a certain pattern or order, like the numbers in a phone number. The pattern of DNA determines if the gene is working properly.

A gene has three regions that work together like a factory or machine:

How Does a Gene Make Proteins?

The DNA in the gene is a code that is “transcribed” (or talks) to another kind of molecule called RNA. This is like matching up one side of Velcro to the other (hook side and loom side). The RNA then “translates” the DNA to put together the protein.

Genes are named as they’re discovered. Usually, the name isn’t exactly the same as the condition. This is done in case it’s later discovered that there’s more than one gene involved in the condition.

There are many genes on each chromosome. Like houses on a street, each gene is given an address, depending on where it lies on the chromosome. The address of the FMR1 gene is Xq27.3.

Does everyone have an FMR1 gene?

Yes, everyone has an FMR1 gene. When someone states, “I have the gene for Fragile X,” they really mean they have a gene mutation for Fragile X. Some Fragile X genes are normal and some are not.

Learn more about the “Normal Function” of the FMR1 gene from the CDC.

What does the FMR1 gene do?

The FMR1 gene makes a very important protein called FMRP (Fragile X protein). Though this protein is found in all our cells, it’s most abundant in the nerve cells, and particularly in a part of the nerve cell that “talks” to other nerve cells called “dendrites.” (Also see: Proteins and Fragile X.)

How does an FMR1 gene mutation cause Fragile X syndrome?

A mutation is any change in a gene. Some mutations don’t cause any problems and we don’t know about them (unless found in the laboratory). Mutations in the FMR1 gene involve an abnormal expansion of the DNA in the promoter region of the gene.

Often a mutation causes decreased or absent protein production. In individuals with a “full mutation,” their FMR1 gene is shut down and they don’t make enough or any FMRP.

What are the different forms of the FMR1 gene?

The FMR1 gene appears in four forms that are defined by the number of repeats of a pattern of DNA called CGG repeats.

DNA is made of molecules that are abbreviated A, C, G, and T. A CGG repeat in the FMR1 gene is a pattern of DNA that may repeat itself anywhere from 30 to 1,000 times. In the FMR1 gene there is an area of the promoter region that is rich in these CGG repeats and is measured when Fragile X testing is performed.

The full mutation causes the FMR1 gene to shut down or “methylate” in one region. Methylation happens to other genes when they’re supposed to be turned off (as in the genes we don’t use, like those that make a tail grow!).

Because the FMR1 gene produces the important protein called FMRP, when the gene is turned off it does not make this protein. In Fragile X the methylation turns off the FMR1 gene, so no FMRP is produced.

The lack of this specific protein is what causes Fragile X syndrome.

Fragile X in an “X-linked” condition, which means the FMR1 gene is on the X chromosome.

In most X-linked conditions, all males who carry the abnormal form of the gene are affected. Fragile X syndrome is unique in that unaffected males can carry the gene in the premutation form while themselves having no symptoms of the condition.

Most X-linked conditions are also not passed on to daughters. Fragile X syndrome is unique here too, because it can also affect females, though usually less severely than males. Because females have two X chromosomes, when they receive one X chromosome that carries a mutation, their second, “normal” X chromosome often masks its effect.

This short, two-minute video helps explain how the Fragile X premutation or full mutation is passed on to sons and daughters.

How the FMR1 Gene is Passed Through Generations 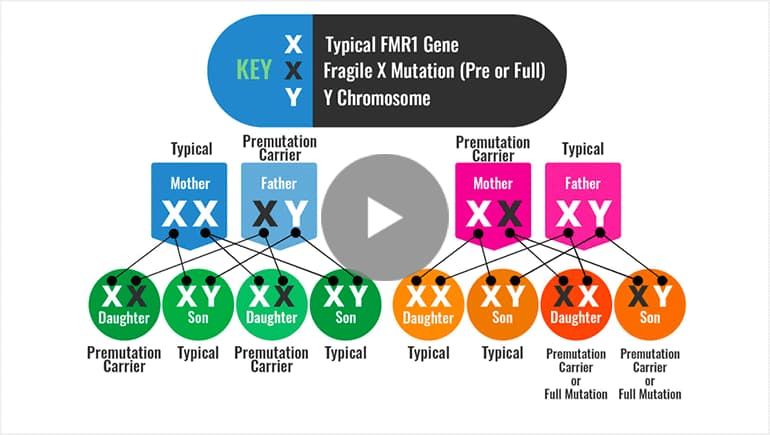 As shown in the video and image above:

Approximately 1 in 151 females and 1 in 468 males carry the FMR1 premutation. They are known as “premutation carriers,” often shortened to “premutations.” Premutations are defined as having 55–200 CGG repeats and can occur in both males and females. (Also see: What Defines a Carrier.)

A common feature of premutations is that the gene can change sizes over generations, potentially expanding to a full mutation in subsequent generations.

Typically, the premutation has no immediate and observable impact on a person’s appearance or health. However, some females with a premutation will experience Fragile X-associated primary ovarian insufficiency (FXPOI), which causes infertility, irregular or missed menstrual cycles, and/or early menopause.

Additionally, some older adults with a premutation may develop a neurological condition called Fragile X-associated tremor/ataxia syndrome (FXTAS), an adult onset neurodegenerative disorder. This is most common in males over 50.

Most full mutation CGG expansions have some degree of methylation (the process that “turns off” the gene). Males with a full mutation will have Fragile X syndrome, though with varying degrees of severity.

About 65%-70% of females with a full mutation will exhibit some difficulties with cognitive, learning, behavioral, or social functioning, and may also have some of the physical features of Fragile X syndrome (such as large ears or a long face).

The remaining 30%-35% are at risk to develop mental health issues such as anxiety or depression, or they may have no observable effects of the full mutation.

Most of us have heard of CGG repeats before, including how these patterns of DNA molecules are counted when testing for Fragile X (FMR1) mutations. But when we hear a number like a 400 (a full mutation) or an 80 (a premutation) and that’s it, is that all there is to it? Just a number? We may envision a long tract of CGGCGGCGGCGG over and over again, as the genetic counselor or doctor described. But how are “AGG interruptions” related to Fragile X inheritance?

See our overview of the importance of AGG interruptions and why it might matter.

AGG Interruptions
An overview of the importance of AGG interruptions and why it matters.

Methylation and Fragile X
Learn more about good and bad methylation, why it’s not really the CGGs, and mosaic females.

Genetic Testing for Fragile X Syndrome and Associated Disorders
Fragile X testing, analysis, and diagnosis is a complicated subject. This page has extensive information for both parents and medical providers.

FMR1 Gray Zone Allele: What Do We Know About It?
The “gray zone” allele in the FMRI gene is so named because much about it remains unknown. Surprisingly, the gray zone is anything but dull, and instead represents a burgeoning area of research in Fragile X-associated disorders.

Genetic Counseling and Family Support
From our treatment recommendations, learn more about genetic counseling, how to find a counselor, and how a genetic specialist can provide family support.

What Defines a Carrier?
In her role as a genetic counselor, Brenda Finucane frequently meets with women who have Fragile X pre- or full mutations. Here she helps us understand the definition of a carrier.

Understanding a Fragile X Intermediate Result
Depending on the situation, an intermediate result can cause a lot of anxiety. While there are still unanswered questions about intermediate alleles, there are many things we do know.