FXS has been detected in all populations and ethnic groups. As a result, efforts have been made to determine the overall prevalence of FXS and the difference in prevalence between males and females. Studies have been undertaken both in the “special needs” population and the general population.

The reason there are fewer females with FXS than males is that the gene for FXS is located on the X chromosome. Males, having only one X chromosome (XY), will develop FXS because there is a mutation of their single X chromosome. Females, who have two X chromosomes (XX), can have the unaffected X reduce the effects of the affected X. This typically leads to no or milder symptoms of FXS. (This is an important distinction, as many females with the full mutation do not consider themselves, nor are they considered by others, to have “fragile X syndrome.”)

While researchers do not have an exact number for how many Americans (males and females) could have full-mutation fragile X syndrome, the ratios noted above suggest that the raw number of individuals could be as high as 87,000 or as low as 38,000. (Worldwide, the number could be between 1,400,000 and 777,000.)

However, it is important to note that some published papers suggest greater prevalence and some lower prevalence than the numbers cited above.

Fragile X syndrome is the most common known single gene cause of ASD.

Children with FXS Who Also Have ASD

Many studies have evaluated the FXS-ASD link over the past decade. Since many children with FXS are interested in social interactions, they may not meet the diagnostic criteria for ASD, even though they exhibit some features of ASD such as poor eye contact, shyness, social anxiety, hand-flapping and sensory issues. Autism is much more common in boys with FXS than in girls with FXS. According to the CDC, a national parent survey found that 46% of males and 16% of females with FXS have been diagnosed or treated for ASD. The FORWARD Registry and Database tells us that 40% of individuals with FXS are diagnosed with ASD by their doctor in a Fragile X Clinic.

Children with ASD Who Also Have FXS

About 10% of children with ASD are identified as having another genetic and chromosomal disorder, such as Fragile X syndrome. Given the possibility of a link, it is recommended that all children with ASD, both male and female, be referred for genetic evaluation and testing for FXS and any other genetic cause of ASD.

Individual Carriers of the FMR1 Premutation

Approximately 1 in 150-300 women and 1 in 400-850 men in the general population are carriers of a FMR1 premutation. It is estimated, based on numerous prevalence studies, that close to one million or more Americans carry the Fragile X premutation.

It is important to remember that these are estimated ranges and not exact numbers. Whatever the number, the NFXF believes there are a very significant number of people who need the information and guidance that it provides!

These statistics are important because both men and women are at risk for having symptoms linked to Fragile X-associated disorders.

Women with a premutation reported their last menstrual cycle at an earlier age than women without a premutation (48 vs. 51 years).

Men and women with a premutation were more than four times as likely to report dizziness or fainting as people without a premutation (18% vs. 4%).

Men and women with a premutation were more than twice as likely to report numbness as people without a premutation (29% vs. 13%).

This study of 6,747 older adults in Wisconsin found 30 people with a change in the FMR1 gene. Based on this relatively small number of people, the results should be interpreted with caution. These findings may not reflect all people in the United States with an FMR1 premutation. For example, a large Israeli study found approximately 1/130 women were FMR1 carriers.

About 20% of women who carry a Fragile X premutation over their reproductive life span develop POI, compared with only 1% in the general population.

About one-third of women with FXPOI, equivalent to 7% of women who carry the premutation, stop having periods at or before age 29.

Not all women with a premutation experience FXPOI. One well-documented risk factor is the premutation repeat size: the highest risk for ovarian dysfunction is for women carrying premutation alleles in the 80-100 CGG repeat range, not the highest alleles of >100 repeats (although these group ranges are not exact).

One study estimated the risk of FXPOI to be 38% in this high-risk group, although more studies are needed to better define high-risk alleles and the reason for this association.

Among premutation carriers, about 40% of males older than 50 years and 8%-16% of women older than 40 years develop FXTAS.

However, the risk of FXTAS in any given individual is influenced by their:

In women, the activation ratio, or percentage of cells expressing the premutation allele, may also play a role.

Considering all of these factors and literature to date, it is estimated that the lifetime prevalence of FXTAS in the general population is approximately 1 in 8,000. This indicates that FXTAS is significantly less common than essential tremor or Parkinson’s disease in older adults.

For men who are premutation carriers, the chance of developing core symptoms of FXTAS (tremor, problems with walking or balance) increases with age: 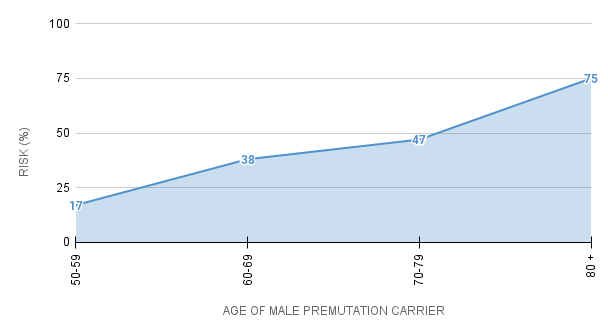 Studies of females have found that about 8-16% of premutation carriers, within families already known to have someone with a Fragile X condition, develop some FXTAS symptoms. The symptoms in females tend to be milder.

FXTAS may be one of the most common adult-onset, single-gene neurological diseases, similar in prevalence to other neurodegenerative diseases such as ALS (Lou Gehrig’s disease); however, more studies within the general population will be necessary before the true incidence is known.