With all the planning throughout the cold, wet spring now behind them, the time had come for the members and supporters of the NFXF Heartland Chapter – Iowa and South Dakota to enjoy the well-deserved fruits of their labors.

The plan for the beautiful Saturday morning, June 4, 2022, was an approximately 40-mile ride beginning and ending at GoodSons Food & Spirits↗ in Des Moines, Iowa, with plenty of sun, fun, food, and a few drinks along the way.

The always popular Bike To X Out Fragile X fundraising event attracted 66 riders, including members of three local clubs and a local TV meteorologist joining in on his first organized ride.

If you’ve never seen or been part of one, chapter co-founder Nancy Carlson tells us that a mass start of nearly 70 bicyclists is truly a sight to see!

Setting off and heading west from GoodSons, they followed route arrows already set up along the planned ride. The first leg was around 16 miles after which the riders were rewarded with drinks and a scrumptious lunch on the outdoor patio of Mickey’s Irish Pub↗ in nearby Waukee. 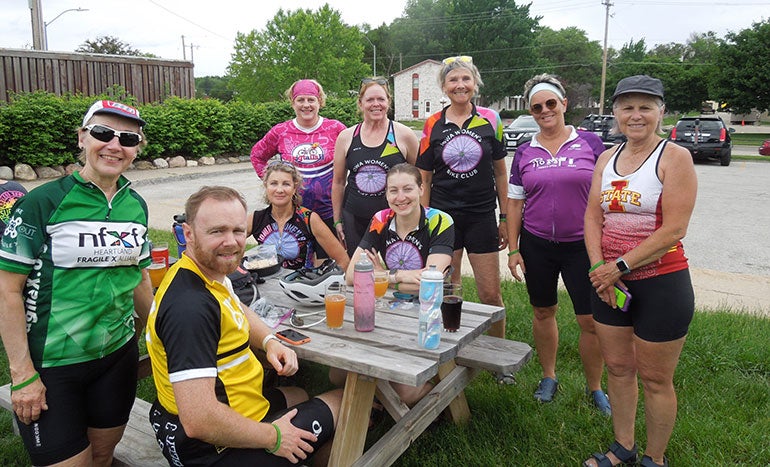 After lunch, the group headed southeast another nine miles to 515 Brewing Co.↗ in Clive where they were treated to a free beer. Then after another few miles and a water stop, they paused for photo opps at the 7′ x 40′ x 10′ RAGBRAI↗: River to River sculpture.

After plenty of pics and selfies, they headed northeast for a few miles to their next stop at the Exile Brewing Co.↗ in downtown Des Moines. One free beer later, they were off and running to reach the finish line at GoodSons, where they started. There, raffle winners were announced and the riders and volunteers could order another meal and beverages. 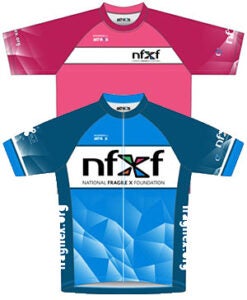 In all, around 66 of the original 75 registrants were in attendance. Many of the riders also wore NFXF branded bicycle jerseys↗, which Nancy says are now often recognized at other bicycling events in their area, including RAGBRAI.

“This event continues to grow and gain recognition. These jerseys are often recognized at other bicycling events … so many more people tell me they know about Fragile X!” —Nancy Carlson

About the NFXF Heartland Chapter – Iowa and South Dakota

Brenda Slama, Tim Geels, and Nancy Carlson started Heartland Fragile X Alliance in 2012 to support families in Iowa and South Dakota. As parents of children with Fragile X, they provide a place where families can connect, share information, and support each other. The group also serves as a resource for professionals working with individuals affected by Fragile X. Through fundraisers, educational seminars, and charitable donations, they hope to be able to provide financial resources for families to access Fragile x clinics, like the one at the University of Iowa Stead Family Children’s Hospital, Center for Disabilities and Development↗. (Search for a Fragile X clinic near you.)

Chapters are part of the NFXF Community Support Network. If you’d like to learn more about the Heartland Chapter, you can send an email to Heartland@fragilex.org or contact one of the founders:

Lifetime Channel Airs “Behind the Mystery of Fragile X Syndrome”

Watch this segment from Lifetime’s daily morning show, The Balancing Act, “Behind the Mystery of Fragile X Syndrome: A Genetic Disorder That Can Cause Learning and Behavior Challenges.”

Neuropsychological Changes in FMR1 Premutation Carriers and Onset of FXTAS

This is the first time that Fragile X premutation carriers have been tracked in a longitudinal study. This study provides evidence for early markers of FXTAS that may be helpful in eventually identifying the best candidates for early, preventive intervention.