The Colombia Project of Hope

Ricaurte and the Founder Effect

In 2005, the UC Davis MIND Institute and the National Fragile X Foundation (NFXF) were contacted by Sergio Villada of the Special Kids Foundation in Florida. Sergio was in Colombia making a documentary about a relative with Fragile X syndrome (FXS). While filming, he had heard of a small agricultural town called Ricaurte that had a high preponderance of people with intellectual disabilities. Sergio also knew researchers from the Universidad del Valle had done preliminary cytogenetic studies to document Fragile X in several families in Colombia. 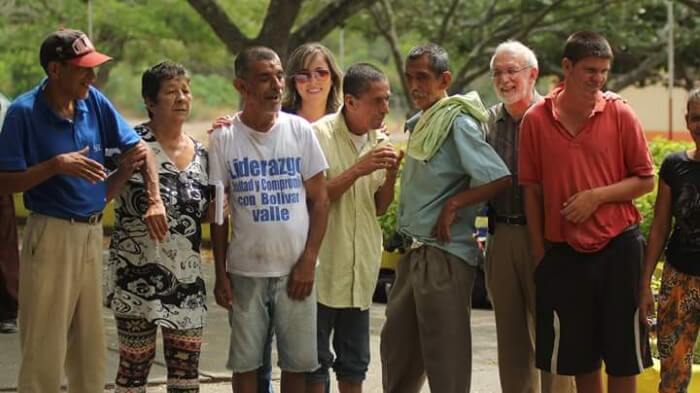 As a result of Sergio’s efforts, in the fall of 2013, Dr. Randi Hagerman and a team of professionals from UC Davis went to the town of Ricaurte to investigate further, conduct additional screening, and provide families and Colombian professionals with treatment recommendations.

The trip began in Bogotá where families attended an autism/Fragile X conference and were seen at a special clinic that was organized as part of the visit. With these families, Sergio and the NFXF’s Robby Miller facilitated the establishment of the Colombian Fragile X Association. After Bogotá, the team then traveled to Cali to meet Dr. Wilmar Saldarriaga, the head of genetics at the Universidad del Valle. Dr. Saldarriaga described his preliminary studies from Ricaurte, demonstrating a strong presence of individuals who tested positive for Fragile X, most likely due to a “founder effect.”

The village thought that the intellectual disability was caused by a toxin in the water, and it was not until Fragile X testing was undertaken that it was determined that the cause was a genetic mutation.

When asked about the founder effect, Dr. Hagerman described it as follows:

One of the goals of the initial trip was to determine if, indeed, the Fragile X mutation was the cause and, if it was, to engage colleagues in Colombia in an effort to better understand what was going on in Ricaurte. There was also a desire to bring help to Ricaurte that was based on the latest consensus and evidence in the treatment of FXS. 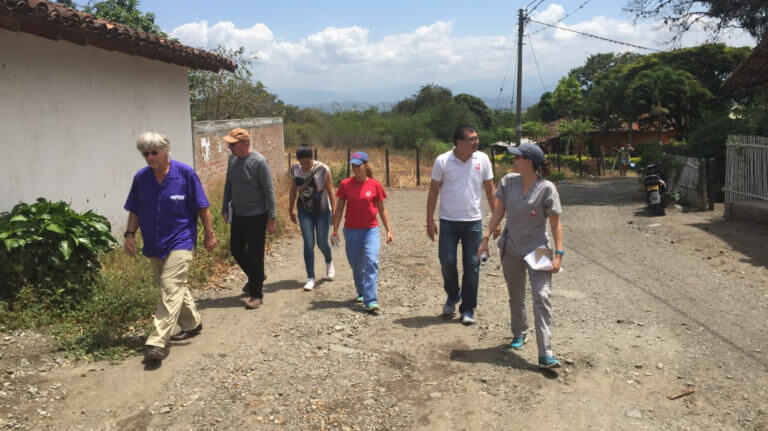 A Much Higher Prevalence Than the General Population

During the 2013 trip and throughout 2014 and 2015, in collaboration with new colleagues at the Universidad del Valle in Cali led by Dr. Saldarriaga, blood spots were collected from the majority of the long-term citizens in Ricaurte. Those spots were analyzed by Dr. Flora Tassone and her team at the UC Davis MIND Institute in California. She shared the following:

A genetic conglomerate of individuals with FXS, likely due to a founder effect, has been identified in the town of Ricaurte, which appears to have the highest prevalence of both full mutations and premutations in the world according to the data so far published in the literature (review in Tassone et al., 2012). Fragile X syndrome (FXS) – the most common form of inherited intellectual disabilities and monogenic cause of autism – affects, in most populations, approximately one in 5000 males and one in 6000 females and the prevalence of premutations is as high as one in 130 in females and one in 250 in males. Our preliminary results from the screening of the town of Ricaurte (~800 individuals) indicate that indeed the prevalence of both full mutations and premutation is much higher than in the general population, being more than 100-fold in males with a full mutation and 10-fold in carrier females. In addition, we have identified two very large families with many affected people. (More than has ever been published.)

These extraordinarily high numbers were the strong evidence that the founder effect was the cause. With this new knowledge in hand, a second trip was organized for the winter of 2016, during which additional blood spots were taken. Importantly, the Colombia Project of Hope team worked diligently to transfer the latest Fragile X knowledge to professionals and families in Colombia. 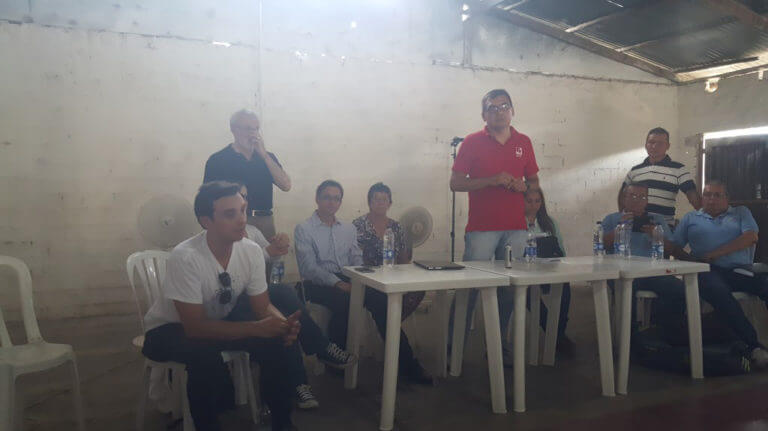 In addition to the work in Ricaurte, the project team traveled to four additional cities to lecture, meet with families and conduct clinics. These trips were organized by members of the Asociación Colombiana de X Frágil, a parent support organization that formed at the time of the 2013 visit. Lectures and clinics took place at Universidad Javeriana in Bogota, Universidad del Valle in Cali, Universidad del Norte in Barranquilla and Universidad CES in Medellin.

The lectures were conducted for professionals, students and parents while medical students joined the clinic teams to serve as interpreters. Interpreters benefited from observing the team members interview and examine Fragile X patients.

Prior to the 2016 trip, four telehealth presentations in Spanish were created by team members and shared with professionals and families throughout Colombia. Those presentations addressed the areas of genetic counseling, behavior modification, the use of new technologies for psychoeducational purposes and medications. 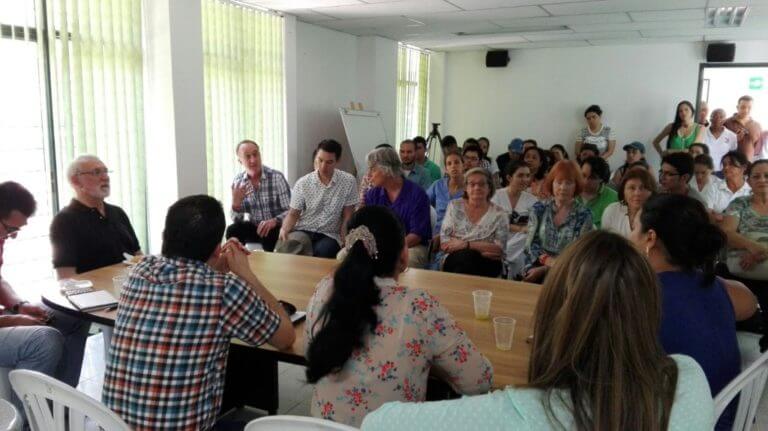 Project team members meeting with community leaders and medical officials in the nearby town of Bolivar to brief them on Fragile X and the project’s goals, while medical students from Cali look on.

Evaluations and consultations provided to individual families in each city visited were essential to the project’s goals. Each family typically met with a team comprised of a medical doctor and specialists, representing genetic counseling, psychology and behavior. When necessary, an interpreter (often a local medical student) served as part of the team. These meetings reinforced a lesson previously learned: Trust must be established between the professionals and a family before the family may be willing to share their biggest concerns. For example, parents often indicated at the beginning of an interview that aggression was not an issue, only to bring it up at the end of a one-hour session. Cultural and linguistic differences made the development of trust even more challenging.

An important part of this project was the critical lessons learned in regards to conducting research and providing human service in a foreign country. Under the guidance of Dr. Sergio Aguilar-Gaxiola, Director of the UC Davis Center for Reducing Health Disparities, the project team carefully considered the cultural, economic and linguistic challenges confronting it. Lessons learned during the 2013 trip were applied to the 2016 trip, which included ensuring that:

While the analysis of the Colombian genetic screening results is ongoing, much has already been learned from the project and the two trips to Colombia. All of the team members have increased their understanding of, appreciation for and skill at dealing with the challenges of conducting research and providing human service in an economically challenged region and within a different culture. Forging meaningful and productive working relationships with international colleagues will always be an essential goal, especially when viewing Fragile X from a global health perspective, and the Colombia project taught all of the team members much about what it takes to develop those relationships. The lessons learned will serve us well as we attempt to understand and provide assistance for other communities strongly impacted by Fragile X, whether in Colombia or elsewhere. 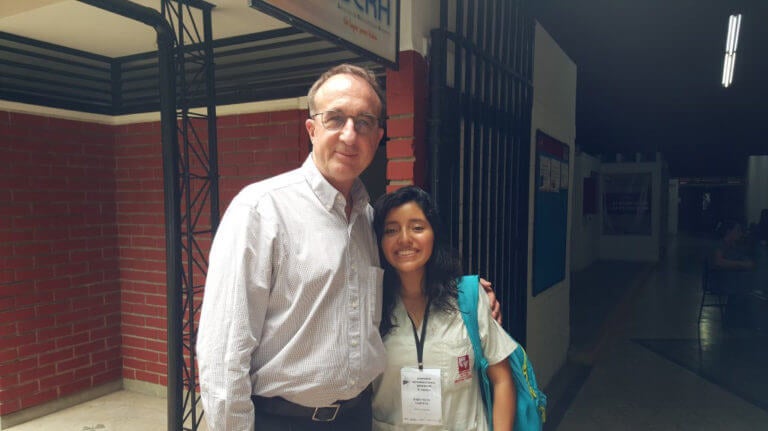 The author with a young Colombian medical student and interpreter.

The Colombia Project of Hope is ongoing. With many Colombian professionals and Fragile X families now talking to one another, Fragile X awareness spreading throughout the country, research is leading to better knowledge and access to appropriate treatment is becoming more common. There is great optimism and, yes, hope. 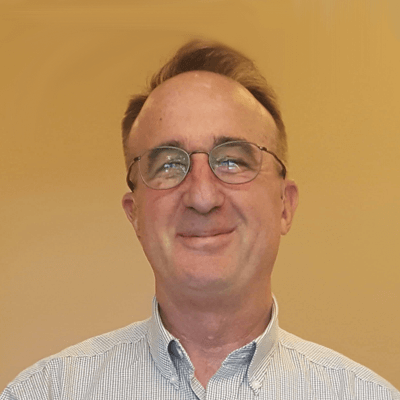 Robby Miller
Robby has spent over 40 years helping children with special needs, and their families and the professionals who work with them. Robby is particularly interested in how families learn about, access, and receive meaningful services from competent professionals, organizations, and institutions. This interest led to his co-founding the Fragile X Clinical & Research Consortium, also known as FXCRC. In his spare time, you’ll find Robby singing and playing rhythm guitar in a rock band with his pals.