CRISPR, a New Genome Editing Tool: Could it Work for Fragile X-Associated Syndromes?

Each year, the National Fragile X Foundation funds one or more summer student research fellowships at $2,500 each through the Summer Student Fellowship Research Fund [Note: now the Randi J. Hagerman Summer Scholar Research Awards]. This award is meant to introduce undergraduate students, or students in professional training programs, to research in the Fragile X field, by providing funding for a summer project. We understand the importance of investing in the future of Fragile X, and this award is part of our commitment to fostering the researchers of tomorrow.

The following is a report from one of the students whose project we funded.

Fragile X syndrome (FXS) is a genetic condition that is a most common cause of inherited intellectual disability in both males and females but usually, the males are more severely affected. The genetic reason behind this disorder is an increasing number of CGG nucleotide repeats in the upstream region of FMR1 gene on the X chromosome. In normal individuals, the number of CGG repeats ranges from 5-54 while in individuals having FXS the number of CGG repeats exceed 200. It leads to the promoter methylation that resulted in silencing of gene and lack of the encoded FMRP protein. This FMRP protein is essential for normal brain functioning and plays an important role in synaptogenesis and synaptic plasticity.

Individual carriers of a premutation allele as having 55-200 CGG repeat are at risk of developing Fragile X-associated tremor/ataxia syndrome (FXTAS), a late-onset neurodegenerative condition, which affects both males and females. The associated psychiatric problems are anxiety, social avoidance, hypertension, depression, fibromyalgia, migraines and immune-mediated problems. In addition, approximately 8-16% of premutation women are at risk of developing Fragile X-associated primary ovarian insufficiency an ovarian disorder that is associated with the menstrual irregularities, infertility, and menopause before the age of 40. One of the potential reason of these premutation problems is associated with CGG expansion that leads to an increased level of FMR1 mRNA resultant in decrease production of protein FMRP (the mechanism opposite to the FXS). There are no therapies currently available so new studies are needed for developing treatment strategies for the Fragile X-associated disorders. 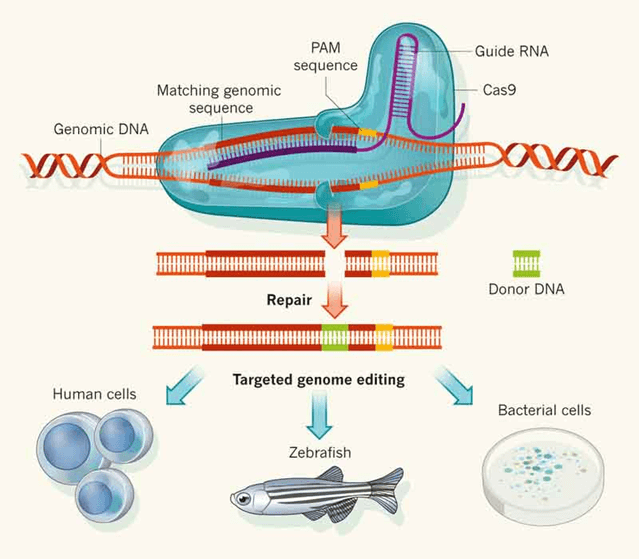 CRISPR (clustered regulated interspaced short palindromic repeats) is an RNA-guided genome editing tool, that is capable of targeting and modifying specific genomic regions. It has been applied in eukaryotic genome editing, in which the Cas9 protein, with the help of gRNA, targets a specific region of the genome and generates the double-stranded break. The cut site is repaired by non-homologous end joining (NHEJ) a process results in insertions or deletions of base pairs (indels) or homologous directed repair (HDR) where the introduction of donor template results in precise editing (Fig 1).

In this study, we utilized the Ribonucleoprotein (RNP) complex that is a mixture of single guided RNA (sgRNA) and purified Cas9 protein to target both upstream and downstream flanking region of CGG repeats in human fibroblast cell lines carrying the premutation allele (Fig 2). We hypothesize that excision of these CGG repeats will the rescue the altered FMR1 mRNA and FMRP expression levels observed in premutation carriers.

Our preliminary results demonstrate that this CRISPR system is working successfully in in-vitro (on PCR products) but we couldn’t able to excise the repeats in Human fibroblast cells that is probably due to a low editing efficiency of sgRNA2 that target the downstream of CGG repeats. Now I am testing new gRNAs to target the downstream of CGG repeat in combination with gRNA1. CRISPR Cas9 has a profound impact on research efforts including identification of genes as well as the development of new disease models. But there is no previous study reported regarding the use of CRISPR genome editing tool for FMR1 premutation alleles. Hopefully, the genome editing by transient expression of Cas9 (as RNP) will permit the consideration of a range of delivery options for therapeutic applications. With the optimization of suitable delivery system and proper assessment of specificity, we can clinically translate this study for the therapeutic editing specifically in the fragile X-associated disorders.

Marwa Zafarullah
is a graduate student in Integrative Genetics and Genomics at the University of California Davis. She is currently working with Dr. Flora Tassone at the Mind Institute and trying to investigate the underlying molecular mechanism contributing to the pathogenesis of FXTAS.