What would you like others to know about him? 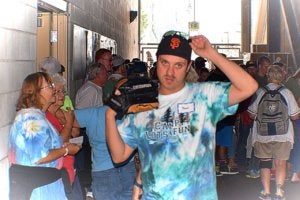 We noticed the difference in my son, Paul, when he was less than 3 years old. We took him to Children’s Hospital in San Francisco to be evaluated by a Psychiatrist. After only twenty minutes with the doctor, he told us that Paul would never be able to do much, and that we should think about putting him in a facility or home. He could not have been more WRONG!!!!

Paul, is now 34 years old. He was diagnosed with Fragile X syndrome at the age of seven. Paul had ADHD and was extremely active. He also had many ear infections as a young child and minimal speech. After several more evaluations a doctor at UC Davis suggested to us that while Paul was getting tubes for his ears, they could perform a blood test for something called Fragile X syndrome. We had gotten several diagnoses over the years, but none really fit Paul, so we decided to do the test for Fragile X. Paul tested positive for Fragile X and we finally had a name for his disability.

Prior to knowing that Paul had Fragile X, we were very pro-active and had him in a special pre-school through the Unified School District in San Francisco when he was 3 years old. This program offered many services to help young children with developmental skills. He had speech therapy and they worked on developing his motor skills and social skills. This was an excellent beginning for Paul’s development. Paul continued in Special Education classes throughout his school years. He was also main streamed in some classes with modifications made for him. I was very involved with every aspect of his education; making sure he was getting help when he needed it, working with the teachers to explain how to work with Paul, educating them about Fragile X. Paul’s speech improved and as his skills developed, he was able to learn to read and even do math. He could do his times tables, add and subtract using the touch math program. He has an incredible memory.

Paul graduated high school and then went into “New Step”, an after-high-school special education program. These teachers worked with Paul on independent living skills and offered a work training program. When he left the New Step Program he went to work at Pride and Neighborhood Center for the Arts. He enjoys working and loves making and spending the money he earns.

Paul did not want to live in a group home. He wanted to live independently just like his sisters and brothers. Each of his siblings moved into an apartment over our detached garage and then out on their own. It was now time to see if Paul could do the same with some assistance. To our surprise, he thrived living in his own apartment virtually on his own. He had an aide that would come to “his place,” as he called it, and work with him on independent living skills. This incremental move, living near us but not in our house, was a true success. About four years ago Paul moved into an apartment building for seniors and people with disabilities. He loves his apartment and everyone in the building seems to love Paul. He is an exceptional human being who loves playing and watching sports, singing, going out to restaurants, and going to camp in the summers. Paul is able to go to the grocery store and operate the self-checkout at the supermarkets. He does most of his own banking and using the ATM machine for deposits and withdrawals. He fully enjoys his life and his independence. He has two wonderful aides that assist him in doing chores and keeping his apartment clean. Paul’s sense of humor is off the charts and has a positive outlook on just about every aspect of life.

I love my son and I am so thankful that he is happy and loves life! The only sad part of this story is that he has become so independent and self-sufficient, he almost doesn’t need me anymore. But then that was the goal. I still get to spend some great quality time with him.

What is your favorite thing about him?

Paul has an infectious laugh.

If you could tell someone who doesn’t know anything about Fragile X one thing, what would it be?

There are success stories. It takes dedication and lots of work but the outcome is tremendous.

What is your advice for newly diagnosed families?

Get as much information and support that you can. Go with your gut. You know your child better than anyone.

What do you want your community to know about Fragile X?

That just because someone does things differently or acts differently doesn’t mean that they cannot fit into the community.

What advice do you have for parents/caregivers who are considering participating in research studies and/or clinical trials?

We participated in many clinical trials. It is important to do research to find a cure.

About Faces of Fragile X

We asked parents, caregivers, and others to answer a few questions about their loved ones with Fragile X. These are the Faces of Fragile X, and This is Fragile X. If you would like to learn more about Fragile X, start here. 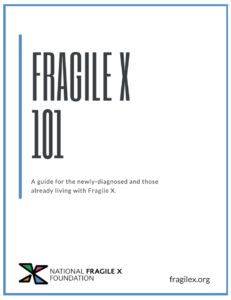