Life with Fragile X: Who is Helping Who?

Recently, we sat down with Laura Dooling. Laura is 32 and lives in New York City. When we spoke with her, she was in Minnesota with her extended family waiting out the pandemic.

Laura does not have Fragile X syndrome, however, she’s part of a large family with several generations of carriers, including Alec, Jake, and Jack, who have full mutation Fragile X syndrome, and who Laura is especially close to because they’re all within a few years of each other in age, ranging from 29 to 32. They’ve been friends and part of her life for as long as she can remember, or, as Laura puts it, “They’re kind of my crew.”

I think that it’s really more just about that they are people with personalities, who have superpowers that we don’t even understand. Talk about light in your life. I need them so much.

We talked to Laura about what it’s like to hang out with her crew — how they interact, what they like to do when they’re together, if their differences have ever impacted their friendship, and how they make her a better person.

Alec is Laura’s second cousin once removed, “My grandma is a twin, so those two twins’ families just kind of function as one since they’re so close. So technically, Alec’s mom is my second cousin.”

Alec’s mom is Anne Souder. Anne and Jay Souder have been actively involved in Fragile X awareness and fundraising since Alec was diagnosed at the age of five. Jay served as president of the NFXF Board from 2018 to 2020 and is a member of the board’s Executive Committee.

Jake and Jack are Laura’s cousins, the sons of her mother’s sister.

Laura’s extended family is large and very close, and, while they live all over the country, they are intentional about getting together regularly. And, of course, there is texting, phones, and FaceTime. Laura told us about a day when she was feeling the stresses of living and working in New York City amid the pandemic, when she was alerted to a text from Alec. He had sent her a photo of his dog, Bella, with the message “Bella misses you!” It made Laura’s day.

The Alec, Jake, and Jack “Entourage”

When we asked Laura about what kind of things she likes to do with her cousins, she thought about it for a few seconds, smiled, and told us, “I love to go anywhere with them because it’s sort of like traveling with celebrities. They’re just extremely outgoing. And they’ll talk to anyone, and they really are so funny.”

One day not long ago, the four of them went to a t-shirt store (to get matching custom t-shirts!) and it quickly became clear that the woman working there was not having a good day — the store was obviously understaffed, she was completely overwhelmed with customers, and her frustration showed.

Laura said they waited patiently and when it was their turn, the boys started telling the woman: You’re doing a really awesome job here! I really like your store! This is a great store! You seem like you really know what you’re doing! She ate it up, they had turned the day around for her just like that. “They do that to everybody. I mean, they just make people laugh and smile and yell all the time. They go out of their way to notice other people and to tell them they’re doing a good job and that means so much to people. People don’t get to hear that enough.”

Living in the Moment

The boys live in the here and now. This is a theme that came up time and again during our conversation, including how it helps them see what really matters. Laura believes it explains their uncanny ability to hold on to even the tiniest memories for years — even decades.

When I’m with the boys, the thing that I like so much is they really are just so present and they’re so in the moment. Alec is always just ready to tell me some funny story about something that happened. And it just forces me to, to just relax and be present and enjoy a moment rather than get caught up thinking about other things … they have a level of focus to something that is happening that allows them to appreciate and notice so much more. They remember details of experiences that we had 10 years ago that I completely forgot about, because they were present. 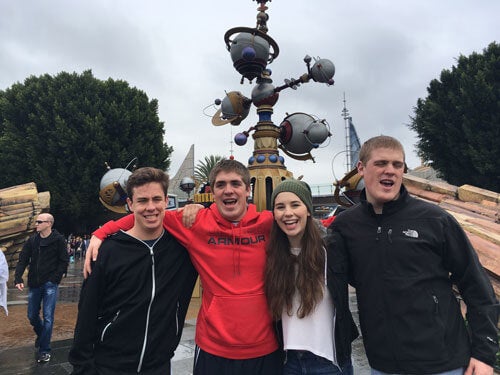 “Our trip to Disneyland,” said Laura, “was the best day ever, because, obviously, Disneyland is amazing, but they were just loving it. They’re just so present and so focused on what’s actually happening. You couldn’t pick better travel companions.”

What do you want others to know about Fragile X?

We loved our conversation with Laura, so you will probably hear more perspectives from Laura in the future. For now, we will leave you with how Laura responded to the question: What do you want others to know about Fragile X?

“When I’m talking about my cousins I get past the clinical description of Fragile X and just immediately focus on … they’re just fun, they’re the funniest people in the world. They’re so funny and loving, and they’re the best.”

“I think that it’s really more just about that they are people with personalities, who have superpowers that we don’t even understand. Talk about light in your life. I need them so much. And I think that people often assume the opposite when you have a family member with any sort of special needs, and I don’t think that that’s true.”

“I would go out of my way to make sure people understood that it’s not about just helping them, or making their life better or whatever — it’s truly the opposite. It goes in the opposite direction just as much, if not more, in my experience.”

Laura added that if she had to give anybody advice on how to navigate a friendship or a family relationship with someone with Fragile X, it would be “to just do things with them, because I think people are reluctant to engage in that way for various reasons.”

Dan Whiting
Dan served as the NFXF Director of Community Impact from 2017 to 2022. He has over 23 years of experience in public policy and communications, including 11 years as a staff member for a U.S. Senator, in the Bush Administration as Chief of Staff at an agency, and as a senior strategist for communication initiatives across the DOD. During his time at the NFXF, he was passionate about helping individuals with intellectual and developmental disabilities live better lives.