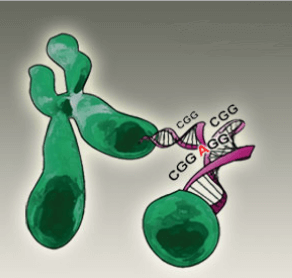 A new study reveals that increasing CGG repeat length in the premutation range (55–200 repeats) doesn’t necessarily put one at increasing risk of psychiatric disorders — the relationship is more complex.

The study, Psychological status in female carriers of premutation FMR1 allele showing a complex relationship with the size of CGG expansion↗, by Danuta Z. Loesch, MD, PhD, and colleagues, represents a collaboration between medical centers and universities in Australia and the U.S. A total of 117 women aged 18-79 in Australia and 182 women aged 19-86 in the U.S. identified through their family trees participated in the study.

These women completed a questionnaire called the Symptom Checklist-90-Revised (SCL-90-R)↗, which is designed to assess a broad range of psychological problems across nine primary domains (for example, depression, anxiety, obsessive-compulsive). The authors summed scores across these domains (“partial scores”) to produce a “global” score as well.

This suggests that those with mid-size repeat lengths may be most at risk for developing a psychiatric disorder. This doesn’t mean that women with that repeat size should be particularly alarmed — the effect is only moderate in size, such that only 10 percent of participants had scores high enough to be clinically relevant. Because of this, it’s not likely the case that the premutation allele is the sole cause of psychiatric disorder. Rather, a more plausible interpretation is that the premutation allele may make one more sensitive to major life stressors that can trigger depression, anxiety, or other psychological problems.

So CGG repeat length is non-linearly related to psychology.

The premutation allele can put women at risk for early menopause, so the authors examined the 110 post-menopausal women in the sample, and noted the age at which menopause began.

This study is significant because it exemplifies a growing collection of research that the effect of the premutation allele on biological and psychological function may be non-linear, and thus more nuanced than we originally thought. This will have practical implications on how researchers test for relationships between CGG repeat length and function. It may also explain some discrepant results across studies — for example, an effect observed in one study but not another may be due to differences in CGG repeat length of the sample of people tested.

A strength of this study was the multi-site design across two countries. After controlling for age and verbal intelligence, the two cohorts did not differ. Interestingly, nearly 15 percent of the U.S. sample had FXTAS, while zero percent of the Australian sample did, and the authors noted that this discrepancy has been previously observed, yet is currently unexplained.

The U.S. sample did have a higher mean CGG repeat length than the Australian sample (91 vs. 84). This suggests that pooling data across international sites is a promising way of expanding the range of CGG repeats in a sample, which will make it easier to examine the effects of CGG repeat length on function.

In short, this study highlights the complex effects of CGG repeat length, and exemplifies the power of large-scale collaborations. 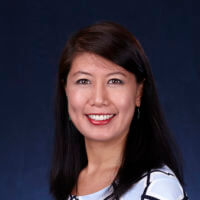 Ling Wong, PhD
Dr. Ling Wong is the Chief of Staff for the Division of Neuroscience at the NINDS — NIH National Institute on Neurological Disorders and Stroke. She facilitates staffing and workforce programs, improves processes and communications in DON and across Divisions and offices, helps with outreach and partnering with other ICs, and leads DON-relevant scientific portfolio analysis projects.

She first joined NINDS in 2015 as an AAAS Science & Technology Policy Fellow in the Office of Science Policy and Planning. From 2016 to 2020 she served as a health program specialist in the Neurogenetics Cluster of the Division of Neuroscience. Dr. Wong completed a postdoctoral fellowship at the Veterans Affairs Medical Center in Washington, DC. She earned a doctorate in neuroscience from the University of California, Davis, and a bachelor’s from Brown University in human biology (brain and behavior).