The Many Functions of Perseveration

Home/FXS/The Many Functions of Perseveration
Previous Next

The Many Functions of Perseveration

Perseveration: the continuation of something (as repetition of a word) usually to an exceptional degree or beyond a desired point. 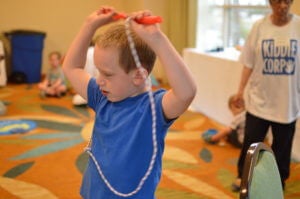 this continuation of a repeated word or phrase. This repetition can be maddening when you are the recipient. At face value, perseveration has no redeeming features and simply serves as an irritant, but in the life of one with Fragile X syndrome (FXS), it can be a valuable asset. Perseverative verbiage often accompanies arousal and acts as a buffer to reduce the anxiety. The repetition can be comforting like a mantra or song.

Understanding the function of the perseveration can be better understood if one listens to what is being repeated. For example, when a young child repeats a phrase like “And then?” or “Next?” it is easy to understand that the function is related to needing to know what is coming next. This continued repetition serves as a safety net to assure the child that there are no surprises awaiting them and that they will be OK with the plan.

Sometimes perseveration serves as a way to initiate conversation. Often the conversation begins with the same phrase over and over without really listening for a response. The perseverative phrase may be borrowed from an observation, television program or video. This type of conversational mechanism is far different from scripting or echoing a phrase heard in a video. The echolalic response is more typical of individuals with autism (Murphy & Abbeduto, 2007).

Phrases such as, “I didn’t do it, it’s your fault” or “Right on” is more consistent with the speech patterns of those with FXS. These rote phrases open up or keep a conversation going without much regard for the conversation or topic that follows. Additionally, because the phrase can become a trademark of the person using it, the response from the listener is predictable, creating less social stress for the person with FXS.

Sometimes, the repetitious verbiage creates rehearsal of an action or task. For example, repeating the steps of a direction over and over tends to hold information to compensate for short-term memory deficits. Using perseverative talk can enhance overall functioning and executive functioning.

How can someone “decode” perseverative communication to understand what the person with FXS is attempting to communicate? Using a cloze strategy to finish out the statement can be helpful.

For example, sometimes when a person with FXS is especially aroused, they remember certain aspects of the experience that caused the hyperarousal. They may repeat something like “He hit my leg,” “He hit” or “He hit and got mad, mad.

Of course this kind of conversation gets stuck when one tries to question what happened while sorting out the repeated phrases. Following up with “Who hit?” or “What happened?” or “Why did he hit you?” falls short and may result in more frustration.

Using a cloze phrase such as, “Today at school, he hit you and got mad” will then generate additional comments such as, “Jim got mad, Jim hit me, got mad and hit me, got in trouble, Jim was bad.”

Females with Fragile X syndrome may also use perseverative speech, but as would be expected, it serves a different purpose. Anecdotal accounts suggest that females use the perseverative talk to emphasize a salient point or to mark a particular aspect of an experience. For example, the perseveration may not be repeated consecutively but rather pop up several times in the conversation. Often when a female with FXS is communicating an especially emotional experience, she may intersperse a comment she repeats several times in the conversation.

An example would be:

This perseverative thought persists in a way that interferes with the conversational flow and content but clearly indicates what was most difficult about their interaction. The female was unable to get beyond David not looking at her to understand the reason for his behavior. This common reaction can be redirected by repeating the perseverative language.

In the example above, the therapist could say something like, “David was so upset, he couldn’t even look at you. He was really upset and didn’t look up when he spoke to you.” This conversation puts the behavior in a context that uses the female’s language to better understand the interaction and more importantly the emotional content.

Understanding the function of perseveration requires the observer to look beyond the monotonous repetition of the verbiage into what in the environment is prompting the excessive repetition. Equally as important, the observer should attempt to extract meaning from the perseveration. If you take time to listen to the perseverative talk by utilizing the “fill in” or cloze method, you might find an annoying behavior will become useful in the quest to better understand your child.

Marcia Braden, PhD is a licensed psychologist with a clinical practice specializing in children and adolescents. She is a former teacher with experience teaching general and special education. She has written and published numerous articles related to education and behavior management strategies, techniques, and interventions. Dr. Braden is a member of the Scientific and Clinical Advisory Board to the National Fragile X Foundation and is a member of the Advisory Committee for the Hill Springs Learning Center. Dr. Braden frequently consults with parents, therapists, educators, and medical staff about effective treatments. Respected for her work internationally, she has presented at numerous conferences and workshops about Fragile X syndrome, autism, and other related disorders.
By NFXF|2019-07-09T17:24:36-04:00Apr 28, 2016|FXS|