Passion for Community and Support Key to Success for Annual Conference

Passion for Community and Support Key to Success for Annual Conference 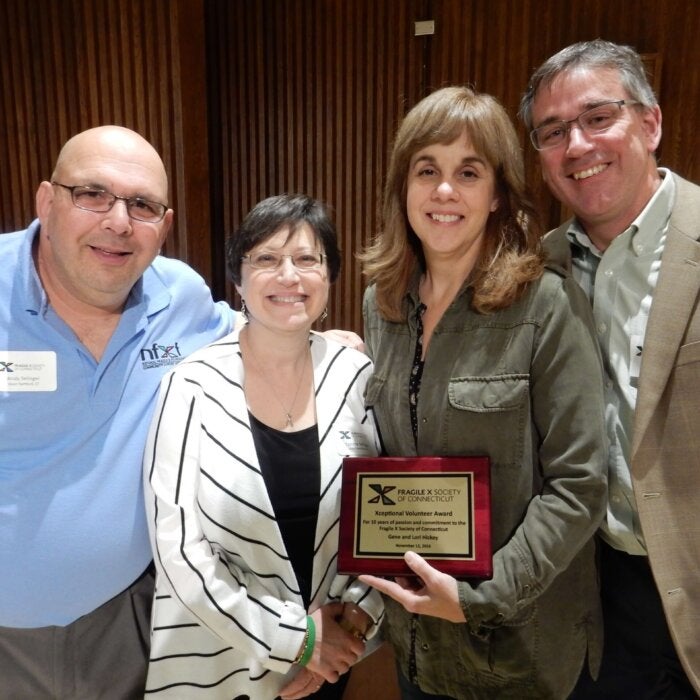 When Tammy and Andy Selinger received their daughter’s diagnosis in 1994, even their doctor was unsure what it meant. He just told them the test was positive for Fragile X. One of their first calls was to the National Fragile X Foundation, where they were connected to a long-time volunteer, Margaret Israel, who spent more than an hour and half on the phone with them. The support they found during such a critical time motivated them to get involved because as Andy says, “Nobody should get diagnosed without someone to talk to.”

They quickly took on revitalizing the local Connecticut group, serving as leaders now for more than 22 years. They have held meetings, organized social activities and provided parents the same support they received. In 2008, they were offered an opportunity to host an educational conference with Mouse and Tracy. Quickly taking on the challenge, they organized the first of nine highly-successful, annual conferences.

According to Andy, the success of these conferences lies in Tammy’s marketing and mass emails, but it is also evident that together, the couple makes a passionate and effective team. Tammy, with her persistence, has amassed an email list of more than 12,000 people, including parents, teachers, state agency employees, officials from all 169 towns in Connecticut, school districts and many other professionals. She believes that even if the recipients don’t attend the conference, she has raised awareness by sharing about Fragile X. The conference attracts attendees from all over New England and Canada, and in 2016, there were people attending from nine states.

Tammy also believes that personal contact is a key to their success so she and Andy make hundreds of phone calls each year. They have developed key relationships in the community with sponsors and the University Center for Excellence in Developmental Disability at the University of Connecticut. The Center, which shares the Foundation’s mission of educating families impacted by developmental disability, defrays the cost of the conference room and audio-visual services, allowing them to keep the cost affordable for parents who must also pay for childcare and travel expenses.

Through the years, the couple has tried to improve the conference with innovations, from scheduling individual evaluations with the experts to encouraging presenters to spend breaks talking personally with families. For the last few years, they have focused the conference on a single topic, allowing the experts to delve more deeply into the subject matter, and they strive to have presenters answer every question asked by attendees during the Q & A session. The response has been enthusiastic, with 140 attendees this year. For the last few years, half of the attendees have been new, and they have also been successful in reaching out to many state agencies and educators, who make up almost half of the attendees annually.

The impact of the Selinger’s educational conference can’t be measured just in terms of number of attendees, sponsors or even wonderful evaluations. It is told in the stories of those who attend.

For one family, it meant a son learned to read because his teacher attended the conference. She listened, learned and put strategies into practice, and within six months, he was reading. For another family, it meant receiving support immediately after diagnosis. Connected to Tammy and Andy by their doctor, they attended the conference just two days later. There they met with a Fragile X expert who became their personal doctor. This year, educators found the presentations and material particularly helpful. One teacher shared that she works with two preschool children who are in the process of being diagnosed. At the conference, she had the opportunity to talk with parents about their struggles, preparing her to help the parents of her students who are just beginning to navigate this new world of Fragile X. These are but a few of the many stories of those encouraged and strengthened in their journeys because of the efforts of these two volunteers. Tammy and Andy Selinger volunteer because they are committed to doing something about Fragile X, and all who attend their conferences benefit from their dedication, their passion and their desire to make sure no one impacted by Fragile X ever feels alone.

Paula Lipford has more than 15 years of experience in volunteer and community engagement, specializing in connecting a volunteer’s passion to action. Paula spent nine years as the Director of Volunteer and Community Engagement with the National Multiple Sclerosis Society. There she developed a comprehensive engagement program that connected volunteers to innovative leadership opportunities, leading to significant results in increased fundraising, awareness, programs and advocacy. Paula has served in leadership roles with several health and education-focused organizations. She recently relocated to the Twin Cities area and enjoys exploring the area, spending time with her family, reading, writing and walking briskly with her newly adopted dog, Molly.
By NFXF|2017-02-22T09:00:20-05:00Feb 22, 2017|Central Connecticut, Community Support Network|