The Summer Scholars Research Awards are designed to introduce undergraduate students and students in professional training programs to the field of Fragile X research. We do this by funding summer projects that add to the body of knowledge around Fragile X in a meaningful way.

Awards were announced in May, and we asked each awardee to summarize their summer project in a 15-minute video presentation, and here they are! Lucky us!

Summary: As a recipient of the National Fragile X Summer Scholars Award, this summer has been nothing short of amazing. My project is titled “Potential Drug Therapy for Fragile X Tremor/Ataxia Syndrome.” There are currently no effective treatments for progression of the disease or cures.

Mitochondrial damage is a recently identified cellular feature of both FXTAS-diagnosed and asymptomatic expansion carriers. FXTAS-derived fibroblasts and neurons have reduced levels of key mitochondrial proteins, increased production of reactive oxygen species, and decreased ATP production. Therefore, the reversal of mitochondrial dysfunction may serve as an early pharmacological intervention in the treatment of FXTAS.

My summer research entailed analyzing the biological efficacy of arachidonyldopamine, macamide, and their analogues in normal human fibroblast and neurons after glucose oxidase induced oxidative damage.

From the results, the current concentration of glucose proved to be ineffective in inducing physiological disruption of cell viability. However, we found an increase in cell viability with the use of Curcumin at 12.5 and 50nM. Curcumin in combination with glucose also showed a similar trend.

Also, the introduction to a network of colleagues this summer was phenomenal, even though each of us are studying different areas of Fragile X all of our goals remain the same, which is to make an impact within the Fragile X community.

John Burwinkle is a second-year undergraduate student at the University of Cincinnati supervised by Dr. Christina Gross at Cincinnati Children’s Hospital Medical Center.

Summary: Through the NFXF’s Summer Scholar Research Award I was fortunate enough to get a deeper understanding of how research in the basic sciences can translate to future practices in clinical medicine by revealing mechanisms that could be targets for potential therapeutics.

I researched how inhibiting a microRNA, miR-324-5p, via an antagomir effects neuronal structure and protein expression in a Fragile X mouse model. The antagomir treatment in FMR1 knockout mice did decrease dendritic spine density that is typically higher in these mice than wild-type controls. This provides initial preclinical evidence for the use of antagomirs as a potential therapeutic for Fragile X syndrome. However, the mechanism and targets of miR-324-5p remain unclear and should be further studied before the therapeutic should be used.

This in combination with hearing the stories of the families. Our networking event made me appreciate how my work fits into the larger Fragile X community and provides hope for the future. Ultimately, this summer displayed how intertwined research is and how everyone from both the basic sciences and clinical realms play a significant role in the future of medicine.

Summary: Our study is exploring the diagnostic odyssey of women with Fragile X-associated primary ovarian insufficiency. This summer we interviewed 24 women with FXPOI to better understand their diagnosis, healthcare experience, self-advocacy, along with other factors that contribute to their experiences.

A lack of educational materials and clinician training might be contributing to the difficulty women experience receiving a FXPOI diagnosis and have a large psychosocial impact for women with FXPOI. It is essential that any healthcare provider ordering genetic testing for at-risk families understands the risks that come with FXPOI as well as how the healthcare system is impacting these families.

We hope this study will serve as a steppingstone to create a centralized and improved diagnostic experience for FXPOI.

Summary: This summer I conducted a study on visual evoked potentials (VEPs) in children with Fragile X syndrome. My project combined EEG methods and behavioral measures to identify differences in the VEP response that could serve as neural markers to be used in clinical trials and to monitor developmental progress in children with FXS.

In the coming months, I will be continuing data analysis for the project and examining additional behavioral measures to further characterize the relationship between VEP, cognitive development, and FXS.

I am thankful for the opportunity I had this summer, and I look forward to seeing the positive impact of this study in the future.

Congratulations Collis, John, Bonnie, and Elizabeth! We can’t wait to see what your futures hold. 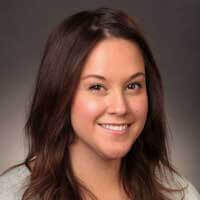 Hilary Rosselot
Hilary joined the NFXF team in 2019. Prior to joining the NFXF team, she worked at the Cincinnati Fragile X Research and Treatment Center for over five years. She has experience as a clinical research coordinator across many types of clinical trials and served as the clinical research manager for the Cincinnati program. She earned a bachelor’s degree in psychology, a master’s, and is a SOCRA certified clinical research professional (CCRP). She enjoys time with family and friends, a great book, a strong cup of coffee and, of course, a good laugh!