How an Adaptive Physical Education Class Should Be “Run”

One of the best programs that I have ever seen was the adaptive physical education (APE) class that was in place when my son, Ian, was in high school. It was a wonderful program where people with and without disabilities got to know each other. The program improved the confidence in students with developmental disabilities and, maybe even more impressively, it gave typical students a chance to really see past the disability and instead see the person.

Ian was based in a life-skill class of 12 children, who all had developmental disabilities. There was a wide variety of needs in the students in this class, and some of the students had very high needs. There were usually one to two per year who were in wheelchairs and non-verbal, others had behaviors issues, but all of them liked being around other children.

For all seven years that Ian was in high school, the class was the second period of the day and taught by freshman football coach, Coach Z. He was the perfect person to run a class like this; he was one of those kind of people who could find the “wonder” in every student with a disability.

The class was an option for any typical student in the school (a school of 2,000 children) and in any one semester, it was so popular that it would reach its max of 50 students, with more on the waiting list.

The Program: Let’s Get Ready to Rumble 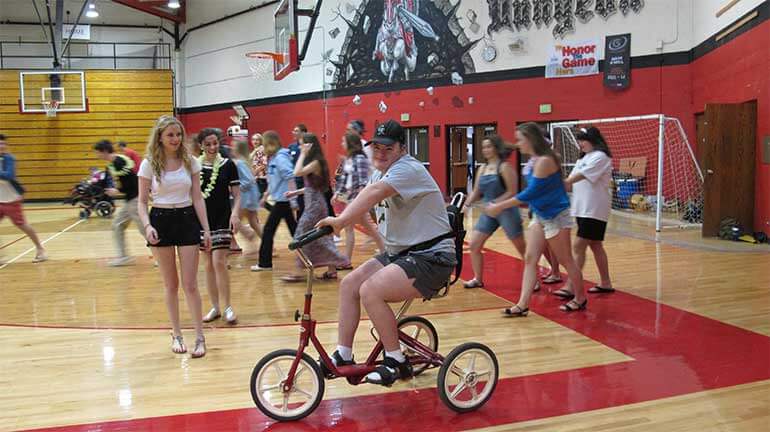 A typical class consisted of stretching, an activity or game, and then a few final minutes to mingle and socialize. To set the mood for the class, they would often walk or jog to the song “Let’s Get Ready to Rumble,” and other times they’d stretch to a video of Richard Simmons.

Over the semester, each of the typical students had to come up with an activity or game that had never been done before, and they each got to choose the day they were going to lead the activity. Leading the activity meant explaining the activity to their fellow classmates and then also, directing it for the day. 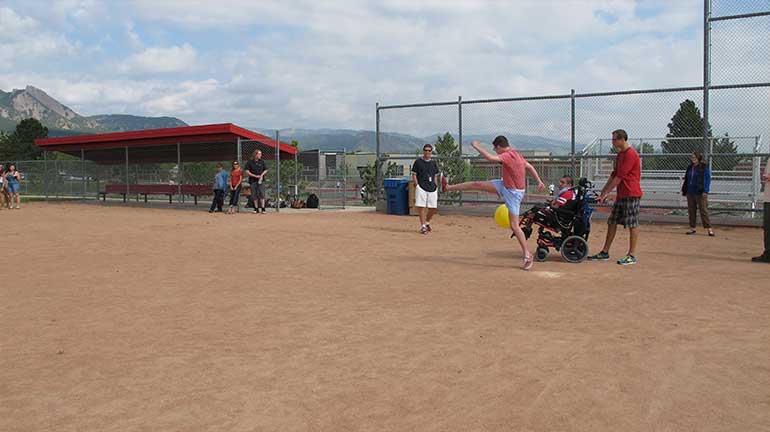 The students had to keep in mind the various levels of all the life-skill students, but they knew they would have the typical students to help out. They wrote up the activity and Coach Z kept it in a binder for others to look at to come up with ideas for their own activity.

Many of the activities were very creative, but many of them were a spin-off of activities that people knew about and had been adapted in order to meet the needs of the various students in the class. The best examples of this I saw were modified versions of “Duck Duck Goose” and “Red Rover.” 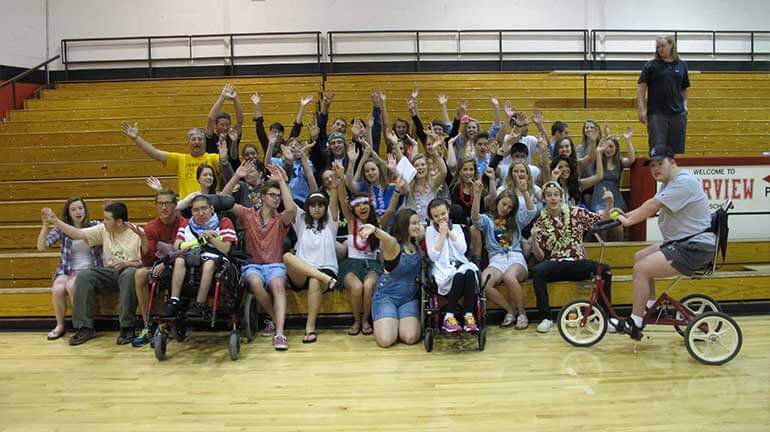 If a student missed a class, they had a variety of ways to make it up. They could go to what was called a “circle of friends” lunch that was held every Thursday in the life-skills classroom, or attend a unified sporting event held outside of school. (The circle of friends lunches were open to anyone in the school who wanted to have lunch with the students in the life-skill classroom.)

Smiles Everywhere: The Relationship Between Typical and Life-Skill Students

Before Ian came to this high school, I had heard they had an adaptive PE class. I assumed it would be all students with disabilities and that the activities would be very simple. When I saw how this class was run, I was simply amazed. But what was really amazing was the look on almost everyone’s face in the class: smiles everywhere.

It was the most fun class for me to visit because everyone was happy. To see the typical students become comfortable with students who were non-verbal in wheelchairs and others like Ian who could run around — and hoot and holler — it just warmed my heart.

It was the most fun class for me to visit because everyone was happy. To see the typical students become comfortable with students who were non-verbal in wheelchairs and others like Ian who could run around — and hoot and holler — it just warmed my heart.

Through this program, Ian got to meet a variety of students in the school and many of them would come to his basketball games in the evening. Ian even got some of the cheerleaders to come to a few of his games — pom poms and all.

I hope you can get an adaptive physical education class like this one set up in your school. It is a wonderful program that I think every student can benefit from. 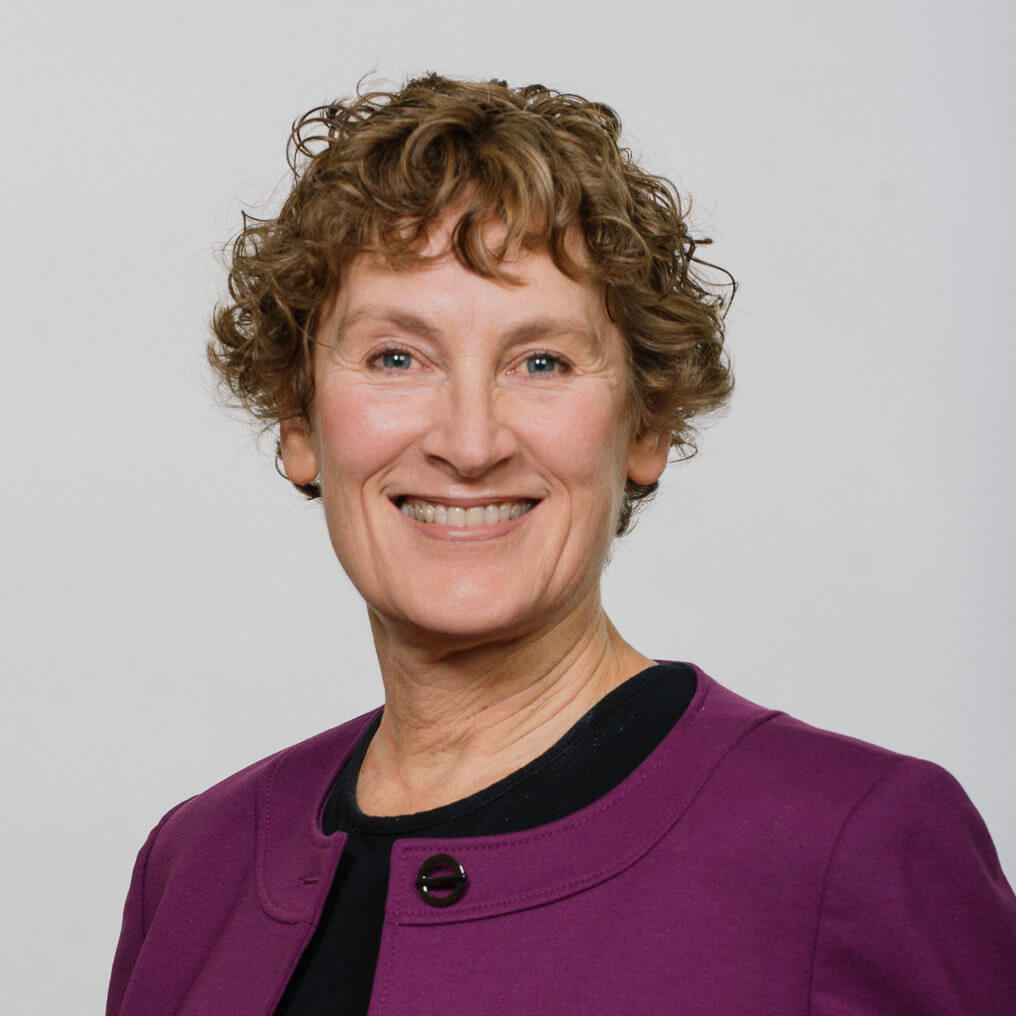 Jayne Dixon Weber
Jayne has been a member of the NFXF team since 2007 and currently serves as the director of education and support services. She has two children—one, an adult son with Fragile X syndrome, the other, a daughter who is an occupational therapist. In addition to assisting with the development of the NFXF’s Adolescent and Adult Project, Jayne authored the book Transitioning Special Children into Elementary School and is the editor for the book Children with Fragile X Syndrome: A Parents’ Guide. She is also the co-leader of the Colorado Fragile X Community Support Network group. Jayne likes to read, enjoys photography, and goes for a walk every day.