Getting and Keeping a Job

“So, when are you going to start working here?” the checker said to my son, as he was pulling food out of our cart to scan. My ears perked up, Ian looked at me. I asked, “I thought you had to work 20 hours a week to work here?”

“No. We have a guy who only works on Sunday afternoons. You just have to work a four-hour shift,” the checker replied.

“You don’t have to work 20 hours a week? You can work one shift a week? Are you sure?” I asked again, still trying to take this all in.

The wheels in my brain started spinning. It was late summer and Ian was 18 years old and he was getting ready to start his high school transition program, a program offered in our school district for students 18–21 years old, after they graduate from high school. I had to figure out how to make this work.

In high school, Ian was in a life-skills program for students with disabilities. While some of the schoolwork took place in the life skills classroom, most of the students also do inclusion. In this program, the students had opportunities to try out a variety of different jobs throughout the high school years, BUT I discovered Ian could not keep any of the jobs permanently, even if the job was perfect for him. These jobs were offered specifically to develop job experience for the life skill students.

What I quickly deduced: The school never had plans to try to find a job for my son when he got out of school. Or for any of the students in life skills, for that matter.

“What I quickly deduced: The school never had plans to try to find a job for my son when he got out of school. Or for any of the students in life skills, for that matter.”

Right around this time, I went to a local disability resource fair. There I ran into a friend who operated a day program for people with developmental disabilities. He gave me some advice: “Do whatever you can to make sure Ian comes out of school with a job. Whatever you can.” I have never forgotten that.

So, Ian gets all these job opportunities, but he can’t stay at any of them. Yet he needs to have a job when he gets out of school. Ugh. So when the checker asked Ian if he wanted to work there, I was determined to make it happen.

Never Be Afraid to Ask for What You Want

As soon as I could go to the store without Ian, I introduced myself to the store manager. This is the store that Ian has gone to his entire life, so many of the people in the store have watched Ian grow up, and they know our family. I asked the manager, “If Ian has a job coach, could he start with a two-hour shift?”

“I think we can make that work,” he replied. (Yyyess! I thought.) I also asked if he could work the same schedule every day, to which he agreed, and continues to this day. As you can imagine, this is huge for our adult children.

Ian works in four hour shifts. I found that is definitely long enough. 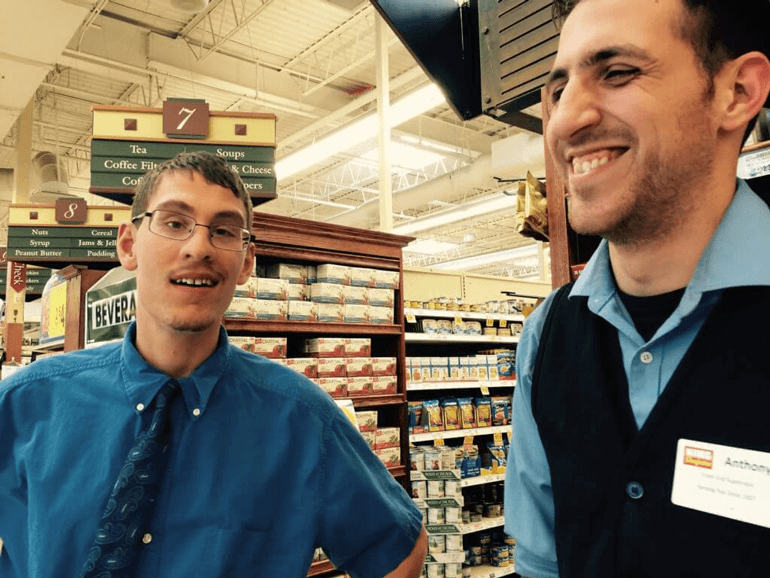 In our school district’s transition program, the students typically go to a different school and continue the different “job opportunities.” It’s a three-year program that takes the students up to age 21.

I had a different plan.

Once Ian aged out of school services (at 21), he would continue working, but he would discontinue all the school aspects. The work times were set up to stay the same when he left school.

I thought this would be perfect for Ian. The school did too.

With a few tweaks and a little time, it worked well. I was thrilled with how things worked out. Ian learned to ride the bus and he started learning skills at the grocery store. Over time, he was also working full four-hour shifts.

Summer came and the district told us Ian would no longer have a job coach. I checked with the grocery store, and they were fine with Ian working on his own. By this time, Ian had a good relationship with many of the checkers and the other “courtesy clerks,” or baggers. This is when I truly began to understand and appreciate natural supports. Some of the checkers worked really well with Ian — they didn’t mind the prompts to stay on task, and I was impressed with the way that all the baggers, most of whom have a disability, looked out for and supported one another.

However, one day I dropped Ian off and one of the head clerks walked up to me. I got the dreaded, “Can I talk to you for a minute?”

The day before, Ian had put bread at the bottom of a bag, and a customer complained. On the spot, I told the clerk the key was to make it simple.

After observing Ian for a few minutes, I went back to the head clerk and said, “Fragile items to the side, bag everything else, fragile items last.” They showed Ian what fragile items were, modeled what they wanted done (using what came to be a mantra), and with a few adjustments now and then, he was off. Did it still happen? Yes, but only every now and then. 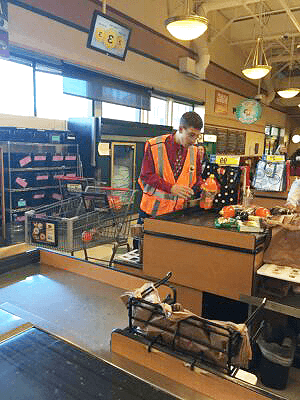 One day the head clerk said we might have to switch Ian’s work times because he needed someone to gather carts during the same time that Ian was working. I responded, “If I bring in a job coach to teach that, could he keep the same times?”

So the debate began.

Is Ian safe enough to bring in the carts? How will we teach him? Is this a smart thing to do? There are cars coming and going, and backing up.

We watched a couple of other baggers bring in the carts, gave Ian the brightest orange vest we could find, and let him go.

Handling the Occasional Bump in the Road

Over the years, working together with the store, I’ve had to deal with various bumps in the road and come up with strategies to deal with each. One strategy is to use mantras. Ian really enjoys these. For example, “Bag ’em up.” All the baggers use the mantra. It’s very cool. When they’re going out to do the carts, it’s “Round ’em up.”

We had to approach it from both sides when Ian kept leaving his area whenever firefighters came in to the store. We first told him, “Ian, you can go say hi to the firefighters, but then you have to come right back.” Next, since we had gotten to know the firefighters, I approached several of them over time and told them about the issue. I asked them to say hi to Ian, maybe chat for less than a minute, but then to tell him he needed to get back to work.

(I actually had to do this with several of our neighbors and friends who frequent the store too. When all else fails, you might hear this over the intercom, “Ian, we need you back up front.”)

I could tell you more stories about how some of the other employees took Ian to a Rockies baseball game … or how Ian sometimes chips in with the deli workers to order a pizza for lunch, or how he’s started buying his own lunch, or how he sometimes buys coffee for the store manager, or how the store manager sometimes buys hot chocolate for him, or how Ian has observed what kind of soda the other employees like to drink and Ian will occasionally buy one for them, or how Ian sometimes wears a tie to work. The stories go on.

Or the time when Ian got to meet the president of Kroger (yes, the top guy, Rodney), and Ian said, “Hey Rodney, how’s it going?” The smile that came to Rodney’s face? Unforgettable. [Update: Rodney McMullen is now CEO of Kroger.]

I never thought Ian would be able to work at a job on his own, without a job coach. But he’s not just working, he’s thriving — he’s been at the store for nine years — and the other employees like him for who he is. I cannot imagine a better place for him. [Update: As of Feb. 2021, it’s now been 14 years, but Ian had to take a break from working due to the COVID-19 pandemic, and has not yet returned to work.]

“I never thought Ian would be able to work at a job on his own, without a job coach. But he’s not just working, he’s thriving.”

One day, I went up to the store manager after Ian had started working there and I thanked him for hiring people with disabilities. He said, “That is just what I do.”

I responded, “You need to know — it’s a big deal, a really big deal, and I just want you to know how much I appreciate it.”