Visit to the Dentist 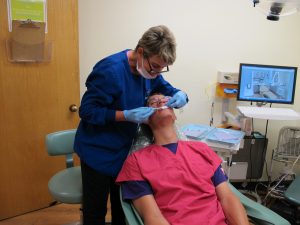 I learned pretty quickly that visits to a dentist were going to be a challenge for my son, Ian.

No, thank you. He would not even sit on the chair. He preferred my lap and would pull my arms around him so he would not have to leave.

When he was four years old, I took him to a pediatric dentist. They held him down and tried to clean his teeth until his hyper-gag reflex kicked in and he threw up. The dentist looked at me and in a not-very-nice-voice said, “Next time, bring him in before he eats anything.” I knew there wouldn’t be a next time. Ian, whose speech was at a two-to-three word phrase level, looked at me when we walked out and said, “I never want to go there again.” I paused, looked at him and said, “Me neither.”

When he was six years old, I found a different pediatric dentist who came highly recommended. He was farther away, but I was out of ideas. When this dentist saw Ian’s resistance to a regular dental cleaning, he suggested we do it under general anesthesia. This changed everything. We got his teeth cleaned, X-rays taken, and sealants added to the teeth. The nurses at the hospital were wonderful – they gave him a blanket that we still have today.

One thing I learned: Ian would not let them start an IV ahead of time. They allowed me to put on a gown and go into the operating room, where they ended up using ketamine, a fairly fast-acting anesthetic, which allowed them to start an IV. But Ian woke up with the saddest sounding wail you have ever heard. They brought me back to the recovery room, and I heard him as soon as I went through the door. It took my son a couple of hours before he was ready to go home and he pretty much slept for two days.

We continued to attempt regular checkups every six months, but sitting in the chair was as close as we ever got. In the meantime, we made sure he brushed his teeth twice a day and, lucky for us, he was not a big sweet eater.

The next cleaning under general anesthesia was three years after the first one. It was very similar to the first time so I knew what to expect, but his waking up from the anesthesia was just as disheartening. Still, we got the teeth cleaned, more X-rays and new sealants placed.

Another four years later – different doctor, different hospital – we had his wisdom removed. As you can imagine, that is a whole other set of issues. Fortunately, the doctor removed them before they became impacted. His recovery just took a little longer and we had to watch his diet more closely for a few weeks.

After all those doctors, we finally found Bonnie. She took the time to talk to Ian while he was sitting in a chair next to me. A few minutes later, Ian was sitting in the dentist chair. Then, over the next two hours, Bonnie was able to very slowly have him recline in the dentist chair. All the way back. Then he smiled… for Bonnie, and Bonnie touched all his front teeth with the instrument. She was even able to scrape the bottom teeth. I think I was holding my breath the whole time. I kept looking at Ian and then Bonnie, thinking, “Oh my gosh, this is really happening.”

Never did I think this would happen. Ever.

We increased visits with Bonnie to every three months. It just got better every time. Bonnie was a miracle worker.

Suddenly, Bonnie left, but what she did is handpick the person who would replace her and tell that person all about Ian and how to work with him.

Just when I thought it could not get any better, we met Hilary. I knew she could see my apprehension at the first visit. I started to ask questions and she looked at me and in the nicest way said, “I got this.” She had spoken to Bonnie and the transition was seamless. Ian soon learned that Hilary liked chocolates with caramel. That became our transition object when Ian goes to see her.

Hilary is now doing a full cleaning in his mouth AND getting X-rays done every other year. She even asked me to send Ian in by himself. I can do that.

I still have to do a few things:

Finding someone who is calm and friendly, and who was willing to take the time with Ian to make him comfortable made all the difference in the world. Bonnie had just the right personality for Ian. Same with Hilary. They both just get Ian.

Ian was 20 years old when he finally did this. Everything seemed to come together at the same time. I still think that if he ever gets a cavity or needs a root canal, we will have to use general anesthesia, but we will cross that bridge when/if it happens.

In the meantime, it is time for me to make an appointment to get my teeth cleaned. Ian said he wants to come watch. I think he knows I procrastinate going to the dentist – it is way easier making appointments for someone else. Being a good role model is a lot of work.

You Can Do It!

Getting our children’s teeth cleaned can be a huge ordeal. I know that just getting them brushed on a daily basis can be a challenge. I encourage you to keep at it – brushing their teeth, taking them to the dentist, finding a dentist who is willing to work with you and using general anesthesia if you need to. I know it can take a lot of time, I understand it can take years, and it can be expensive, but with how much our children smile and laugh, I know you will be glad you did.

Jayne Dixon Weber has been a member of the NFXF team since 2007 and currently serves as the director of education and support services. She has two children—one, an adult son with Fragile X syndrome, the other, a daughter who is an occupational therapist. In addition to assisting with the development of the NFXF’s Adolescent and Adult Project, Jayne authored the book Transitioning ‘Special’ Children into Elementary School and is the editor for the book Children with Fragile X Syndrome: A Parents’ Guide. She is also the co-leader of the Colorado Fragile X CSN chapter. Jayne likes to read, enjoys photography, and goes for a walk every day. Feel free to share your stories with me at treatment@fragilex.org. I’d love to hear from you.
By NFXF|2023-02-01T11:51:45-05:00May 10, 2017|Behavior|