I realized when my son Ian was just 4 years old that he had difficulty with transitions. I had never thought about transitions being difficult. You just did them — you didn’t think about it.

Well, with Ian, I started thinking about them. I still do to this day. I quickly learned I had to allow plenty of time for everything — arrive early to events, set up schedules and routines, take time for transitioning back home — and that this was just the beginning. Over time, the work needed to make a transition successful for Ian became more complicated. And, good or bad, thinking about transitions has become an automatic part of my life.

There are big transitions: moving to a new house or city, starting a new school.

Then there are daily transitions: getting up in the morning, getting dressed, eating breakfast, getting off to school or work — basically every aspect of a typical day.

Then there are special transitions: vacations, summer breaks — any scheduled change of the daily routine. 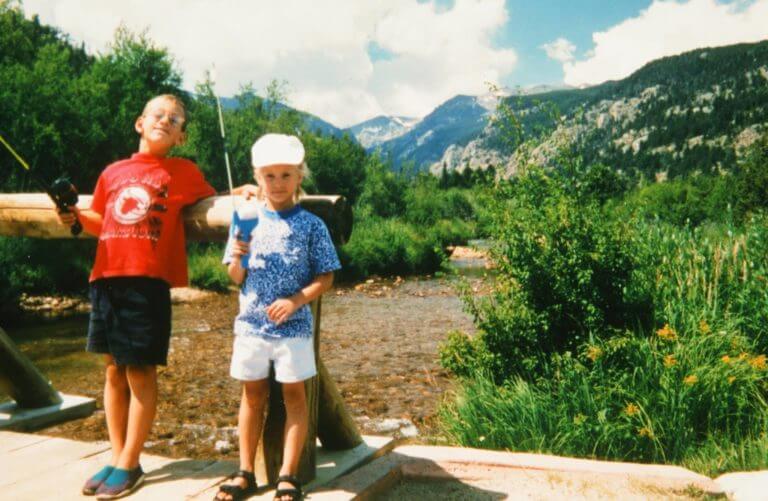 Ian and his sister on a fishing trip.

When Ian started kindergarten (a big transition) I chose the school I thought would be best for him, chose his teacher, educated the teacher, gave a presentation to the entire faculty, and talked to the students in his class and to parents I saw around the school.

For the daily transitions, I created a picture schedule of each day, and I helped develop strategies to transition between activities, such as prompting that an activity was about to end, mentioning what activity was going to happen next, using a transition object, and encouraging use of sensory activities.

For the special transitions of vacations and school breaks, I created a schedule with routine. I had to. These transitions were so difficult for Ian that I soon learned the first two weeks of summer and most of winter break would be filled with aggressive behavior, and many vacation trips had aspects of complete disaster — no matter what I did.

Unexpected transitions such as fire drills were successful because we did not let them become unexpected; we told Ian about them ahead of time. Even telling him sent his anxiety through the roof. When he wasn’t told about a fire drill, things went flying, and usually his glasses were the first thing to go.

So, what happened over time? I figured out better what Ian needed in order to make transitions successful. I still do to this day and it’s a lot of the work, but it’s from a base of experience, not figuring out on the fly what needs to be done.

Our Most Recent Transition

The last big transition he went through? From school to out-of-school. I set it up so the last two years of school, his routine was: 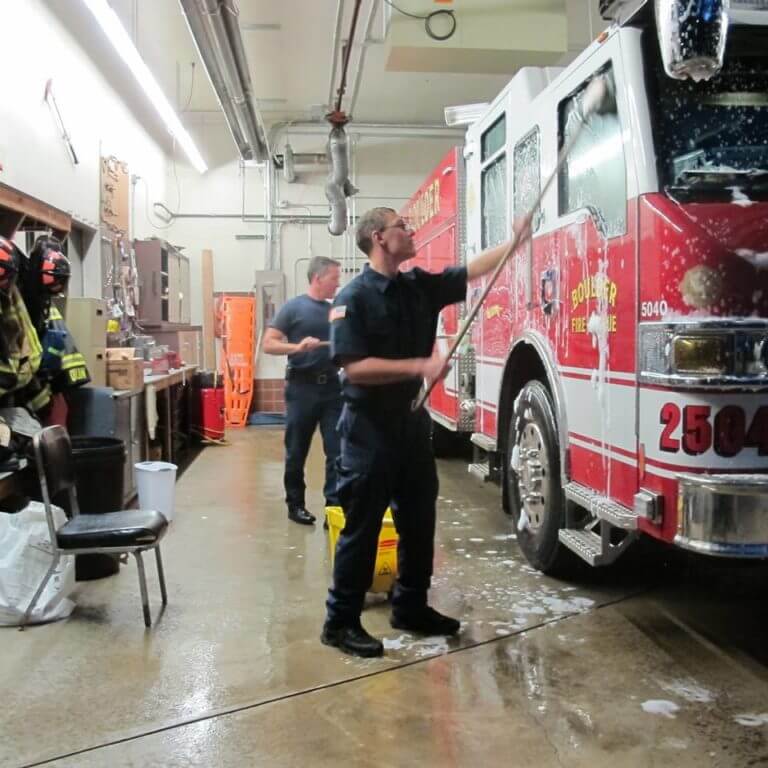 Ian washing the local fire truck with one of the firefighters.

When he graduated, two parts of his day did not change: work and football. He got to sleep in late, go to work, come home for a snack, and then go back to the high school to continue helping out with football team. He liked the sleeping in late part.

For his daily transitions:

I figured out how much time he needed to make his different transitions throughout the day. For example, to get ready for work in the morning, he needs 75 minutes. Every now and then I try reducing it to an hour, but it doesn’t work — he is then 15 minutes late to his job. Basically, as long as his daily schedule has routine, predictability, and plentiful time built in, he does fine. Lucky for him (and me) he has a job with the same schedule each day and where he alternates between gross motor and fine motor activities. He works at our local grocery store, bringing in the carts and bagging groceries. It is a social job — he loves it and they love him. And every afternoon after work he has an activity through our parks and recreation department that is both physical and social in nature, such as basketball, softball, and volleyball.

I tried different visual schedules, and over time Ian told me what he wanted: A calendar that hangs on the wall by our dining table that lists his daily activities. He wanted them hand-printed, and he did not want pictures, so I print the names of his activities. Since I know his reading is limited, I use short, simple words, for example:

I’ve learned how to talk to him about his day. When it looks like something is bothering him, I ask, “What are you thinking about?” rather than, “What is bothering you?” Often he brings up an activity he is anxious about. Then, using his calendar, we run through everything that is to happen during the time period that is bothering him.

I am more flexible. When Ian asks what we are having for dinner tomorrow night, I ask him what he wants to have. When he tells me, I tell him that is fine, but I also know he will probably change his mind, and I let him know that is OK, too.

I praise him for a job well done, especially if I know the situation had him a little anxious and he was able to work through it.

Because he is out of school now, we do not have the various breaks associated with the school year. So the “special” transitions revolve around vacations. In this phase of our lives, my husband and I spend most of our vacation time visiting our parents whose health is deteriorating. Ian likes to visit both sets of parents, so these transitions are much easier than they have ever been. That said, he does like to know what we are going to eat while we are there. Getting that resolved before we leave seems to “ground” him. (And he likes food.)

The other thing I can do now that I couldn’t when he was younger is leave him by himself for one or two hours. If the rest of the family wants to do something that doesn’t interest him, I set him up with a snack and the Food Network on television. And he always has his cell phone handy.

The unexpected transitions are still difficult for Ian. But I have discovered that if something comes up and I allow him time to process and think about it, he often comes around.

“Ian, we just got tickets to a CU football game. Do you want to go?”

Ten minutes of thinking and he says, “Sure.”

Unexpected transitions are still difficult for Ian. But I have discovered that if something comes up and I allow him time to process and think about it, he often comes around.

I sometimes think about how Ian would respond if we had a fire, and the only approach I can come up with is, “Ian, there are some firefighters outside who would like to talk to you right now.” Hopefully this will never happen. But something for you to think about: I have gone to our local fire station and talked to them about the unknown of Ian’s response in an emergency. When our address comes up on their system, an icon tells them there is a young man with a disability living in the house whose behavior in an emergency is unknown. It also has the location of his bedroom.

The difference now for Ian? He understands more about what to expect when he goes places, especially ones he has been to before. If he has not been to a place, I compare it to something he knows. He also has a better concept of time (thanks to 30-minute Food Network shows). He is also able to tell me when he does not want to do something, and I respect that as often as I can.

A final thought: For the most part, “hurry” is not in Ian’s vocabulary. That is a term we should all strive to use much less.