I have FXTAS: Now what?

Home/FXTAS/I have FXTAS: Now what?
Previous Next

I have FXTAS: Now what?

Fragile X-associated tremor/ataxia syndrome (FXTAS) is a disorder that affects Fragile X premutation carriers, typically over the age of 55. Individuals with FXTAS have tremor of their hands when they are using their hands to do activities. They also have difficulty with their walking, appearing as if they were drunk even though they are sober. As the disease progresses over time, people with FXTAS can develop problems with memory and loss of sensation in the feet. Symptoms are highly variable, with some FXTAS patients having more severe tremor and others having more balance issues. Women tend to be more mildly affected, if they are affected at all, due to the typical presence of a normal Fragile X gene on their second chromosome.

Neurologists are physicians who specialize in diseases of the nervous system. Neurologists with expertise in tremor and ataxia are called movement disorder specialists and are frequently located at academic hospitals and in large cities. Patients with FXTAS should establish care with an adult neurologist, ideally a movement disorder specialist, as these individuals are most experienced in treating tremor and ataxia. The neurologist is likely to order a magnetic resonance imaging (MRI) scan of the brain, which can give the neurologist a good idea of what the structure of the brain looks like. MRI results are necessary to establish certainty in the FXTAS diagnosis. Many neurologists work closely with neuropsychologists who can provide detailed memory testing. All of my new FXTAS patients are referred for neuropsychological testing, and this can facilitate diagnosis and the treatment plan. In addition, a psychiatrist is vital for the majority of FXTAS patients who will have other symptoms, such as depression or anxiety. 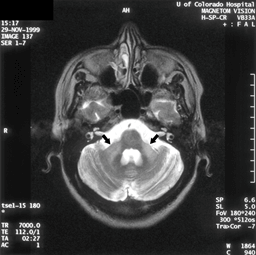 There are no medications to stop, or slow down, FXTAS. For this reason, neurologists use medications targeted to an individual patient’s symptoms. Studies have shown that no particular medications are effective for the majority of patients so the neurologist may need to try several medications or combinations. Tremor best responds to medications prescribed for another tremor condition, essential tremor. Medications include propranolol, primidone, gabapentin, topiramate and levetiracetam.

Ataxia is very difficult to treat, but a number of medications have been shown to be helpful in a small number of patients, including FXTAS patients. These include amantadine, buspirone, gabapentin, varenicline and riluzole. Some of these medications are indicated for diseases outside of the nervous system (like varenicline) so approval from insurance may be needed.

For memory loss, medications on the market for Alzheimer disease can be considered, such as donepezil, galantamine and rivastigmine. Memantine, another Alzheimer disease medication, is the only medication to be studied and reported in FXTAS and did not show improvement in the endpoints, such as tremor, selected by the study investigators. However, additional studies may be needed to determine if there are other benefits.

FXTAS patients with depression and anxiety typically need medication to improve symptoms and quality of life. Selective serotonin reuptake inhibitors are commonly prescribed, but caution is needed as some patients will have worsening balance or falls on this class of medication.

Table for Strategies for Treatment 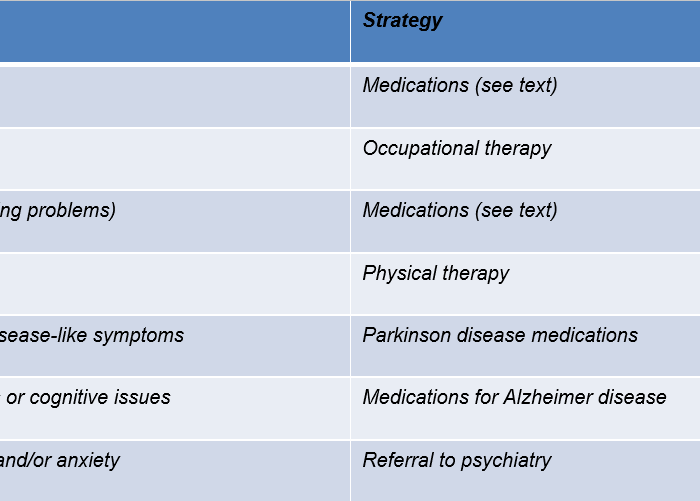 There is strong evidence to support exercise and physical activity in patients with movement disorders. This effect has been most conclusive in Parkinson disease, but has also been shown in ataxia as well. Referral to a physical therapist is the first step that can be taken with a newly diagnosed FXTAS patient, in order to work on training of the gait and fall prevention, if needed.

Both Medicare and commercial insurances provide physical therapy benefits for their customers. Neurologists will frequently have recommendations for physical therapists in your area, but looking at the American Physical Therapy Association website can help you locate a physical therapist in your zip code that specializes in neurological diseases. Most patients will need an entire course of approximately 10 sessions before seeing improvement.

All patients should exercise regularly, making sure to choose exercise that is appropriate to the severity of the ataxia. For example, walking in a pool rather than on a treadmill may be ideal for a person whose balance is impaired and who is at high risk to fall. The recommended dose of exercise is 30 minutes of moderate to high intensity exercise five days weekly.

Some patients with tremor will have benefit from using weighted utensils, such as weighted writing instruments or silverware. Occupational therapists can test these tools in the clinic setting prior to the patient spending money on purchasing them. Referral from a treating physician is necessary. There are several new tremor cancelling spoons and forks on the market, however, I have found that few FXTAS patients find them to be helpful when we test them in the clinic. Movement disorder specialists are likely to have a sample that can be tried before purchase.

Despite high doses of appropriate medications, some FXTAS patients continue to have disabling tremor. Deep brain stimulator placement is approved for use in essential tremor and Parkinson disease and may be considered in some patients. The outcome for FXTAS patients has been mixed, with some experiencing worse memory or walking problems after surgery. More recent reports suggest that surgery on just one side of the brain may be less likely to cause worsening. Movement disorder specialists evaluate and select patients for deep brain stimulator surgery.

Depending on the symptoms, additional resources may be valuable to FXTAS families. Caregivers at home to help with activities of daily living, housework or meal preparation may be beneficial. Neurologists may have a social worker who can facilitate finding these resources locally. Respite care for spouses and family members that serve as the primary caregiver is also necessary. Support groups do not exist for FXTAS, but support groups for Parkinson disease or Alzheimer disease may be beneficial in providing social support systems and resources for caregivers and the patient.

FXTAS is a chronic disease. If FXTAS patients maintain good general health and do not have other medical problems, many can have fulfilling lives for years after diagnosis. Regular visits to a neurologist, high levels of physical activity and use of other therapies and resources are key to sustaining a good quality of life.

Deborah Hall, MD, PhD Dr. Hall is an adult neurologist and movement disorder specialist who has a large FXTAS clinic in Chicago at Rush University Medical Center. She received her MD from Indiana University and her PhD at University of Colorado, where she completed residency and fellowship. She sees movement disorder patients, conducts research in FXTAS and Parkinson disease, and trains the next generation of neurologist and researchers.
By NFXF|2017-09-21T13:58:33-04:00Jan 18, 2017|FXTAS|