Teaching Your Child to Ask for Something

One of the most challenging things for my son, Ian, to do is ask another person (not mom or dad) for something — like a favor or request — in an appropriate way.

This became important when he started working at a “real” job: a grocery store. Whenever he wanted or needed to ask for certain things at work, he asked me to do the asking. Asking for himself, I realized, was a skill he had to learn. So I approached teaching this skill systematically: talk about the whole process, model it, provide supports, and then fade the supports.

Talk About the Process

“Mom, I want to work on Sunday so I can wear my Broncos jersey.”

“Chris.” (Note: Focus on one person who is very nice. She is also the front supervisor.)

“What should we say?”

“Can I work on Sunday?” (Note: Keep the question short.)

We went to the store and found Chris. I looked at her and said, “Can I work on Sunday?” (Note: I used the exact words Ian would need to use.)

Chris looked at Ian and said with a smile, “Yes, if you wear your jersey!”

I noticed something interesting. When we walked away, Ian asked me, “What did she say?”

I thought to myself, “Wow, is his anxiety so high that he didn’t notice the answer?” So I replied, “What did she say?” 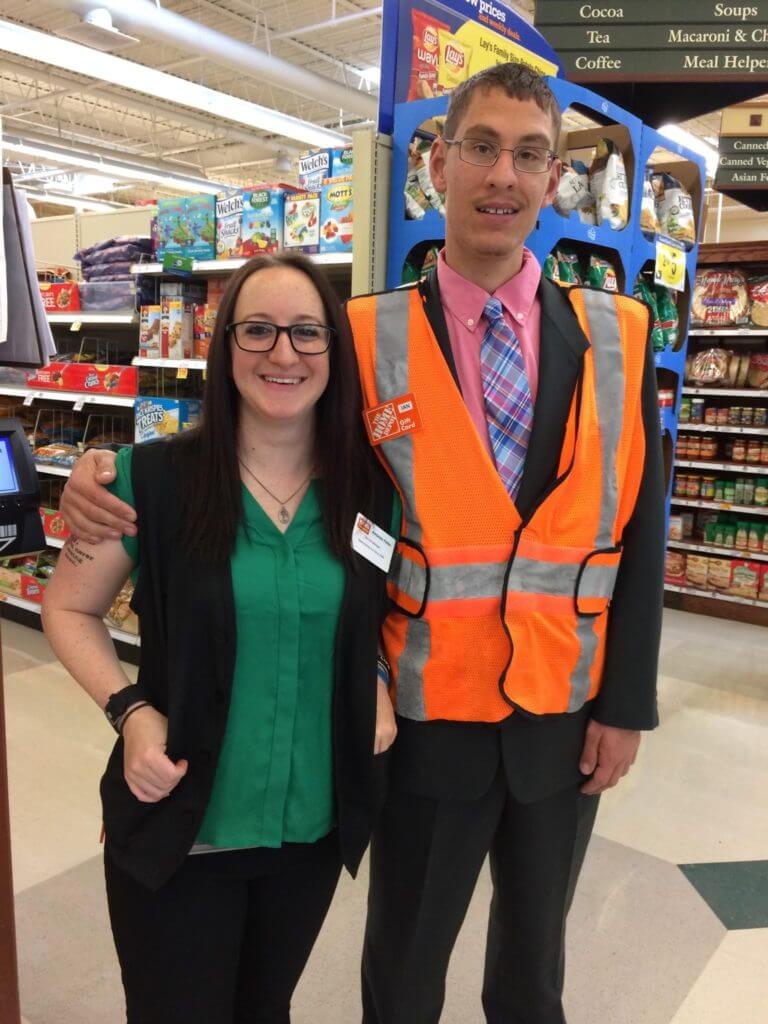 A few weeks later, Ian wanted to know if he could wear a tie and shirt to work. They normally wear store-issued shirts.

I responded, “What do you want to know?”

After that, Ian practiced saying, “Can I wear a tie? (Note: Practice the question a few times in a calm place at a calm time.)

Once again, we found Chris, and I started with, “Can I wear a…” and then I paused, and Ian finished the question with “…tie?”

Then, Ian became comfortable saying the whole question, but I had to be standing right next to him.

Then the next step

I would find the manager when Ian was not around and tell her that Ian had a question for her. She would walk up to Ian and ask him how things were going. Ian would glance at me. I was standing five to six feet away from him, and I would nod my head as if to say “You can do this.”

After that step, I stopped making eye contact and nodding my head to Ian. I acted like I was looking at some new product or chocolate or something.

Soon, I didn’t have to do anything except practice with him what he was going to say. He was able to do it on his own.

Then Chris left. There was a new manager. We took a few steps back, but before I knew it, Ian was asking on his own again.

It helps to have nice people – people who also want Ian to learn this skill on his own.

You can do this with your child, too. You may spend more or less time in the various steps, but don’t get discouraged. It will happen.

I’ll never forget the day when I picked Ian up from work and I asked, “Are you working on Sunday?” He wanted to work on Easter because he has an Easter tie that he wanted to wear.

He looked at me and said, “Yes. I asked all by myself.”

I looked back at him and smiled. “You’re awesome.”

Hear an overview of how the Early Check team integrates telehealth models to provide families with the necessary information, support, surveillance, and intervention.

Supporting Your Child with Fragile X Syndrome During Special Times

An Unregulated Life is No Laughing Matter

Tracy Stackhouse teaches us the importance of self-regulation in individuals with Fragile X syndrome.

The How Toʼs of Sensory Diets in Fragile X Syndrome

How To's of Sensory Diets in Fragile X Syndrome is the new video for this special time from Tracy Stackhouse from Developmental FX. A sensory diet is an occupational therapy intervention strategy devised to attain and maintain appropriate arousal states throughout each day.