I recently completed a 10-day trip to Davao in the southern Philippine island of Mindanao, and Manila in the northern island of Luzon. This being a second trip to the Philippines, and once again involving a team of Fragile X experts from the U.C. Davis MIND Institute, the focus was on training Filipino professionals in assessment, intervention, and patient advocacy.

Two indirect and Fragile X-specific outcomes of our efforts have been the establishment of a Fragile X clinic at the already existing MedMom Clinic in Manila, run by Dr. Angel Belle Dy and Dr. Lourdes Bernadette S. Tanchanco; and the likelihood of a national Fragile X parent organization being formed, using the NFXF as a model, as the result of a meeting I had with an enthusiastic mother who, by chance, is also an attorney! (We’ll let you know when that becomes official.) 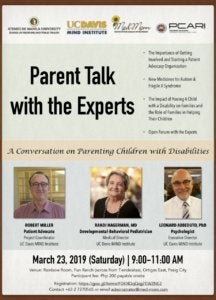 The project began when a doctor from the Philippines spent three months in the International Training Program in Neurodevelopmental Disorders at the MIND Institute, a project I manage when not at the NFXF. Dr. Dy was the international scholar and Dr. Randi Hagerman was her primary mentor. Therefore, it was no surprise that Dr. Dy became highly enthused about Fragile X and made it her mission, when she returned to the Philippines, to improve its awareness, diagnosis, and treatment. Funding by the government of the Philippines was one direct result.

Officially, the project is part of something called the Philippine-California Advanced Research Institute and this particular component is called the Technology Transfer of Clinical and Molecular Advances in Autism. In this case, Fragile X syndrome is included as a primary focus, being the most common known single gene cause of autism and a genetic model for understanding autism.

In addition to our trips to the Philippines, over the course of the two-year project eight Filipino scientists, doctors, and therapists will have each spent three months at the MIND Institute, taking their new skills back home to improve the well-being of their fellow countrypeople.

With a population of approximately 104 million, it is estimated that there are well over 10,000 individuals with Fragile X syndrome and many, many more carriers. Therefore, this ongoing effort will be of great benefit to many families.

A more enthusiastic, gracious, and dedicated group of professionals I have never met, and I look forward to working with them in the years to come!

If you are looking for a clinic or patient organization outside of the United States, please visit our international directory of family support networks and clinics. 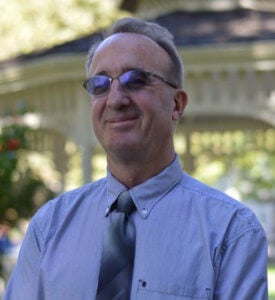 Robert M. Miller has worked with families of special needs children, along with the professionals who support them for the past four decades. From 1999 through 2013, he served as executive director of the National Fragile X Foundation and is currently the Foundation’s Director of Clinic and International Relations. In 2014, Robby launched a human service consulting business, whose clients range from a university medical center to a number of rare disorder parent support organizations, all focused on improving outreach and services to families and better engagement with clinicians and researchers. Robby has also given multiple presentations and assisted with the development of parent support organizations throughout the world.