The Fragile X Dance Crew Burns Up the Dance Floor!

The Fragile X Dance Crew Burns Up the Dance Floor! 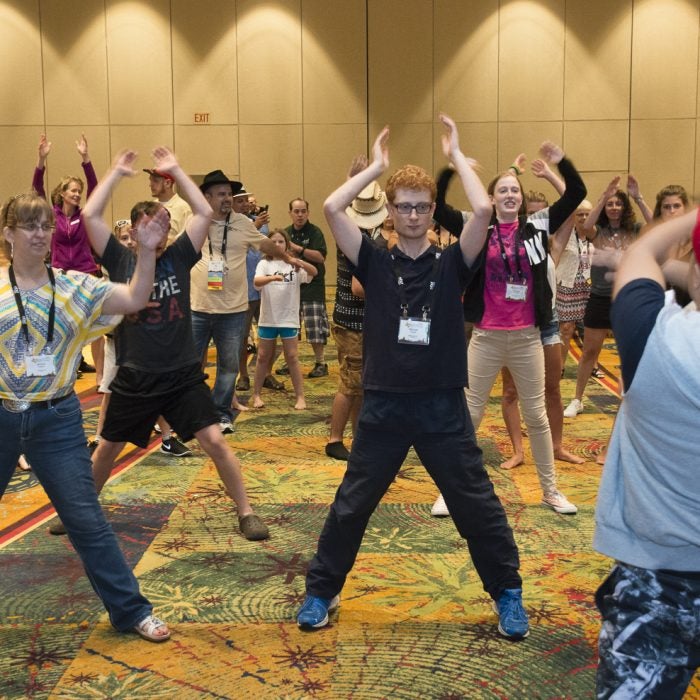 At the banquet, the crew was joined on the floor by many folks who had not taken the class, hence a bit of the chaos you’ll see in the performance video. We didn’t mind it at all though because they added a lot of energy to the students on the floor.

Many parents came up to me afterwards to tell me how great it was for the kids (and adults!) to be able to perform the routine. I agree wholeheartedly. They put in the hard work and deserved all the praise.

Behind the Scenes was Even Better!

If you’d really like to see how well our self-advocates learned the routine, watch the practice video and be awed by their dance moves! The two dance sessions lasted just over one hour each, and students learned it all within the first session. It was an incredible experience to witness just how quickly everyone picked it up. The chorus section was lifted directly from Justin Timberlake’s music video. Needless to say, the students were excited to find out!

There’s also a vital technique that many parents should be familiar with: we used simultaneous learning. First, I performed the entire routine. Then I broke it down and taught each move side-by-side, showing the move first then having them do it along with me. Next, I added a new move, worked on it with them and added it on top of the last move. We kept going until the whole thing was done.

Lucky for me, that’s how you teach any dance class. I can’t say it enough; they learned super fast! If anything, the students might have been restless because I was moving too slowly for them. Even after teaching this class for the second conference in a row, I underestimated them! They are that good.

As the choreographer, I emphasized the importance of dancing for fun and dancing for yourself. How you looked to other people while dancing should be the least of your concerns. I’m so proud of not only how quickly they learned the routine, but how they got over the anxiety of performing for a banquet hall full of people. That’s an accomplishment in and of itself! Our community is full of amazing people who will continue to surprise you.

Let’s keep putting our faith in our self-advocates, and we’ll get to see just how high they can fly!

David Salomon is the communications manager for the NFXF and teacher at the International Fragile X Conference’s dance workshops for self-advocates and siblings. He works with the communications team to manage, curate and edit the Foundation’s website, social media, emails and other NFXF publications.
By NFXF|2016-07-25T17:49:43-04:00Jul 25, 2016|2016, International Fragile X Conference|